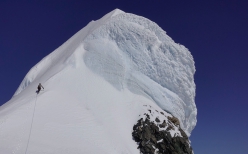 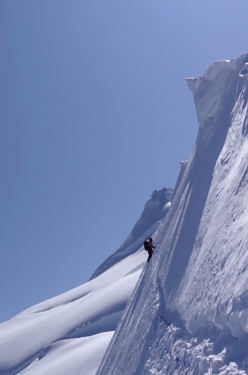 Ian Welsted traversing at the end of the Epaulette Ridge. NW Summit in background
Photo by Simon Richardson 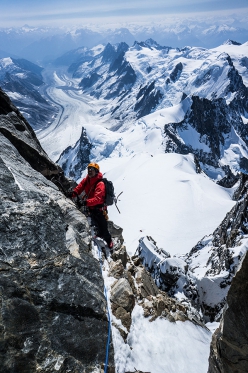 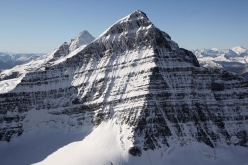 The north face of Mount Phillips in Canada climbing by Simon Richardson e Ian Welsted. The North Spur takes the prominent lower rib then climbs directly through the headwall above to finish up the final part of the west ridge on the right.
Photo by John Scurlock

British mountaineer Simon Richardson reports about the first ascent of the entire west ridge of Mount Waddington in Canada’s Coast Mountains, climbed with Ian Welsted alpine style from 3 to 7 August 2019. On 22 July the duo climbed the North Face of Mount Phillips in the Canadian Rockies.

Inspired by photographs taken by John Scurlock, towards the end of July and at the start of August Britain’s Simon Richardson and Canada’s Ian Welsted competed two noteworthy ascents, first in the Canadian Rockies and then in the Coast Mountains. The former was carried out on 22 July up the hitherto unclimbed North Face of Mount Phillips, while the latter was completed from 3 to 7 August. along the entire west ridge of Mount Waddington. This marks not only the first ascent of the 1.5km upper west ridge, but it was also the first time the entire length of the mountain had been traversed. Richardson - who scorced a series of major first ascents earlier this year in Alaska with Mark Robson - provides the details.

I met Ian Welsted at the 2016 Scottish International Winter Meet and we first climbed together in November 2017 after the Banff Film Festival. We arranged to climb in Canada for five weeks this summer and our sights were set on some adventurous mountaineering in the Coast Mountains.

It’s been an unsettled summer in the Canada and our first opportunity to try anything challenging took place in late July. We were inspired by a photo of the 600m-high unclimbed north face of Mount Phillips by aerial mountain photographer John Scurlock.

Mount Phillips (3246m) lies just north of Mount Robson in the Canadian Rockies. The mountain is rarely climbed and we were helped in the logistics of the approach by local climbers Jesse Milner and Dana Ruddy who told us where to leave the popular Berg Lake trail for the bushwhack through the forest to reach a bivouac on the lower reaches of the mountain.

We set off at 12.30am the next morning, crossed the col east of Phillips and started climbing up the prominent spur running up the centre of the face just before dawn. We were climbing the route as spring transitioned into summer, and we enjoyed good mixed climbing low down on the spur.

Our pace slowed at two-thirds height where the spur abuts the steep headwall. I had hoped for a hidden ramp leading right to the west ridge, but instead we were forced into a narrow ice gully that cut deeply into the headwall. It appeared to end in an impasse, but fortunately an icy ramp led left to easier ground.

It was now midday and the sun was softening the snow. Every time we dropped a rock it would launch a huge surging avalanche down the face below. We were perfectly safe but thankful for our alpine start.

The next pitch across the snow band to reach the final part of the west ridge should have been a straightforward romp across a 45 degree slope, but instead Ian was forced to make a bold and demanding lead on dark shattered limestone covered in a wet layer of snow. I marvelled at his skill placing knife blades and finding the perfect location for our precious single Pecker.

Then suddenly it was almost over. A broad ledge on the west ridge gave way to three exposed and intricate pitches up the sharp arête to the summit that we reached at 5pm. Easy snow slopes on the south East face led back to our bivouac.

We had to wait another two weeks before the weather was good enough for the Coast Mountains. Our plan was to traverse Mount Waddington (4019m) from West to East climbing the unclimbed Epaulette Ridge (Upper West Ridge) in the process.

We flew to Fury Gap (the west defining point on Waddington) on the morning of 3 August straight after two days of heavy snowfall. We set off immediately up the lower west ridge. It was tough going in deep unconsolidated snow and we spent two days getting to the col below the Upper West Ridge.

This hard work paid off as it allowed the snow on the upper ridge to consolidate and the summit tower to clear. On day 3 we continued up the unclimbed Epaulette Ridge to gain the previously unvisited Epaulette Glacier that sits astride the middle section of the ridge crest.

The exit from the Epaulette Glacier was unexpectedly difficult as the ridge narrowed to knife edge with large wafer thin cornices. We traversed under the crest for two scary pitches on very steep snow on the north side until a blind jump into a schrund led to a flat area known as the Terrace at 3900m. We then climbed the False and NW summits (4000m) before making an awkward descent and camping at 3700m under the main summit.

On day 4 we climbed the classic South-East Chimneys route on the summit tower (4019m). We nearly turned back because of icefall from collapsing rime ice. On 7 August (day 5) we descended the chaotic Bravo Glacier to Rainy Knob (the easterly point of the mountain).

Total distance traveled was circa 12km. Our new terrain (Epaulette Ridge) ran from the top of the Dais Couloir (3350m) to high on the Angel Glacier (3850m). So overall the new ground covered about 500m ascent over 1.5km horizontal distance.

Our ascent of Waddington is the only one so far this season. Global warming is making the standard route up the Bravo Glacier very difficult nowadays, and there are far fewer ascents than 20 years ago.