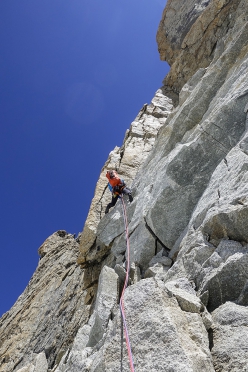 Michael Rinn leading one of the 6a+ pitches on the granite section of the pillar on Perfect Storm, Pointe Louis Amédée, Mont Blanc
Photo by Simon Richardson 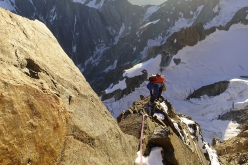 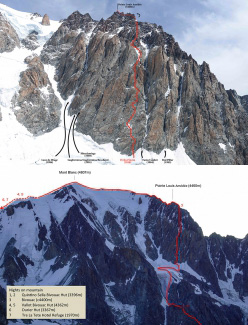 Simon Richardson reports about the first ascent of Perfect Storm, a new 700m climb established together with Michael Rinn over 8 days up Pointe Louis Amédé on the Miage Face on the Italian side of Mont Blanc (4807 m).

In all likelihood the first new route added to Pointe Louis Amédée in almost 3 decades and "the realisation of a 25 year dream to climb on the face followed by a full traverse of Mont Blanc." These are the credentials of Perfect Storm, established recently on Mont Blanc by the formidable Simon Richardson - Michael Rinn climbing partnership. The duo, which in 2016 had established a new route up the Grandes Jorasses, climbed a 700m pillar up the NW Face of Pointe Louis Amédée, to the right of the Miage Face recognised as being “one of the most remote and difficult-to-reach parts of the mountain.” After completing the route, the pair traversed Mont Blanc, spending 8 days on the mountain in all.

Our route is called Perfect Storm (700m, ED1, 6a+) and lies on the North-West Face of Pointe Louis Amédée to the right of the Miage Face. After a two-day approach and reconnaissance from the Quintino Sella Bivouac Hut, we started climbing on 12 August up the triangular pillar between the ice lines of Himalamiage (750m, ED1 Patrick Gabarrou, Giorgio Passino 18-19/01/1989) and Fanta Couloir (700m, TD Gian Carlo Grassi, Enrico Tessera 21-22/04/1984).

We followed a zigzag line on the right side of the pillar for nine ropelengths (4 and 5) keeping right of a deep black gully. When the pillar steepened, we ran into several impasses and thought we would have to descend, but eventually three difficult pitches (6a+) led to easier ground and the upper spur where the granite transitions to schist.

We followed the well-defined spur on solid rock (4 and 5) for six pitches to where the way was blocked by a smooth vertical tower. We bivouacked here, uncertain of the way ahead, but next morning we bypassed the tower by making an abseil and then climbing an overhanging corner to easier ground. From here, 100m of easier climbing led to the summit of Pointe Louis Amédée (4460m).

By now it had started to snow, and we climbed the Brouillard Ridge in a storm (the predicted bad weather came in 12 hours early). Conditions on top of Mont Blanc were extreme, and we descended to the Vallot Bivouac Hut on a compass bearing just as it was becoming dark in a whiteout with slopes avalanching around us.

We spent two nights in the Vallot Hut, and on 15 August we continued by traversing the Aiguille du Bionnaissay to the Durier Hut. Next day we traversed the Domes de Miage and we descended to Les Contamines the following morning concluding our eight-day long adventure.

According to Luca Signorelli, Perfect Storm is the first new route added to the face since Himalamiage in 1989.