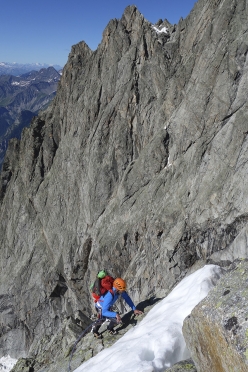 Diamond Ridge Grandes Jorasses: Michael Rinn climbing the crest of the Ridge on the morning of Day 2, 29 July 2016
Photo by Simon Richardson 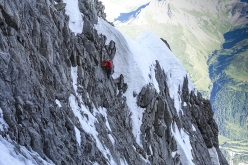 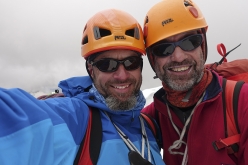 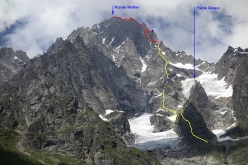 Interview with Simon Richardson who, together with Michael Rinn, made the first ascent of Diamond Ridge (1600m, 5c, AO) from 28 - 30 July 2016. This new alpine climb breaches the SSE Face of Grandes Jorasses (Mont Blanc massif).

Diamond Ridge. This is the name of the new route, established from 28 - 30 July 2016 by British climber Simon Richardson and Germany's Michael Rinn up the enormous SSE Face of Grandes Jorasses. Also referred to as Tronchey Wall, this is one of the wildest, least explored faces in the entire Mont Blanc massif and the route, climbed with two bivies, follows an obvious line identified over a decade ago for 1600m to the summit of the Grandes Jorasses.

Simon, can you describe your new route. Where does it run, what are the main characteristics (length etc), is is completely independent from other routes and have you already given it a name?
Diamond Ridge bounds the right side of the Tronchey Wall on the SSE face of the Grandes Jorasses. The ridge is undercut at its base and defended by a difficult approach up the chaotic Pra Sec Glacier. Instead, we gained the ridge from the south spur of Punta Grassi by crossing under the west branch of the Tronchey Glacier. The new climbing comprises 1200m. It starts at 2600m and joins the Tronchey Ridge below the Second Tronchey Tower at 3800m. From here we followed the final 400m of the Tronchey Ridge to the summit (4208m). Our ascent is thought to be only the fourth time the Tronchey Wall has been climbed. See www.summitpost.orgfor a description of the Tronchey Face and listing of the other routes. The rock is exceptionally good granite, solid with many natural features and holds. The Tronchey Wall is 1435m high and is the highest rock face in the Mont Blanc range. Our ascent started lower than the base of the wall and had an overall height elevation of 1600m.

Did you travel to the Mont Blanc massif with this in mind? And when did you first identify the line?
Yes, this was the key objective of our two-week trip. We acclimatised by climbing routes from the Envers des Aiguilles and Torino huts. We were lucky that the weather became stable during the final part of our stay allowing us to climb the route. I first identified the line about ten years ago. It is such a major structural feature I could not believe it had not been climbed before, but when the ice gully of Plein Sud was ascended in 2010, the accompanying topos showed that the Diamond Ridge was still untouched. I studied the line from the valley floor during visits to Val Ferret in 2012, 13, 14 and 15 and finally decided to attempt it this year. The toughest part was finding a partner prepared to attempt such a long and committing route, but fortunately Micha was up for the challenge!

Talking of Micha. We read 102 years between the two of you. Can you tell us a bit about your partnership
Well I'm 56 and Micha is 46. I live in Aberdeen Scotland and Micha Rinn lives in Gießen, Germany. We met at the Envers Hut in 2014 and first climbed together during the BMC International Winter Meet in Scotland this January. We clicked well as a team and decided to climb in the Alps this summer. Micha is a very safe and talented climber with a cool head in a crisis. He led the crux of our ascent above the Second Tronchey Tower where smooth unprotected granite slabs had to be traversed in crampons to allow an ice gully to be crossed at their end.

What about the descent?
This was my fifth time on the summit of the Grandes Jorasses and we had by far the easiest descent. The cold spring has left the glaciers in good shape. This allowed us to to descend directly from Pointe Walker (rather than traversing across to Pointe Whymper). A storm was racing towards us from Mont Blanc as we gained the summit and it was soon snowing. This turned to rain lower down, but our descent was relatively relaxed as we had good tracks to follow. We arrived at the Boccalate Hut at 1700 to be greeted by hut custodians Franco Perlotto and Roberta Cutri. This was the warmest welcome I have ever had in an alpine hut! And then to cap it all, alpine historian Luca Signorelli walked up through the rain to meet us on the descent from the hut the following morning. Luca and I have been corresponding for over 15 years so it was great to finally meet up!

We know you’ve established various other routes in the area. How does this compare? Can it be compared to other routes in the Mont Blanc massif?
In terms of scale it is similar to the South-West Spur of Punta Baretti that I climbed with Duncan Tunstall in 2009, which also had a 1600m elevation gain (400m ice climbing approach and then 1200m on the spur). The big difference is that the rock on the lower half of Punta Baretti was loose and shattered, whilst the rock on the Diamond Ridge was perfect solid granite. The rock on the Italian side of the range above Val Ferret on the east faces of the Grandes Jorasses, Petites Jorasses and Mont Greuvetta is the best I've experienced in the whole of the Mont Blanc Massif, and the rock on the Diamond Ridge is no different. Whenever you reached up there was a perfect hold just where you wanted it!

So how to you rate this ascent?
I think it is worth saying that in no way can the Diamond Ridge be considered a ground-breaking ascent. Although the scale is large in alpine terms, the technical standard is modest, and it is very much a traditional climb. The remarkable aspect is that it had been overlooked for so long and the rock quality turned out to be so good. And unlike the other routes in the Tronchey Wall the route is objectively safe.

How much potential is there still in this massif in general, and on the Italian side in particular?
In my view the Mont Blanc Range is the finest alpine "playground" in the world and there is still considerable potential for first ascents. I've climbed over a dozen new routes in the massif, and if someone living in Scotland can do that on occasional two-week holidays there must be many possibilities for more local climbers!