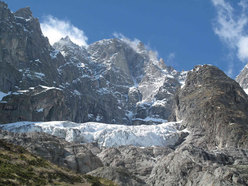 The South Face of the Grandes Jorasses
Photo by Marcello Sanguineti 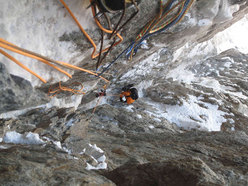 In the gully on the large Chimney on Plein Sud (S Face, Grandes Jorasses)
Photo by Marcello Sanguineti

Plein Sud: new route up the South Face of the Grandes Jorasses

Are there still wild, unexplored mountains faces in the Alps? The question might seem rhetorical, seeing that it's been stated time and time again that those who know how to search properly manage to experience adventures just beyond their doorstep. But on closer inspection the answer to the question is not that obvious, seeing that the desire to measure oneself in the crooks and crannies of our most inaccessible and wild mountains isn't too widespread. That's why the following route appeals to us, first ascended by Sergio De Leo, Michel Coranotte, Marcello Sanguineti amd Marco Appino (3 Italians + 1 Frenchman or Italian origin) up the immense and severe South Face of the
Grandes Jorasses. A face which is rarely climbed and circa 200m higher than its more famous Northern counterpart.

"Plein Sud" finishes close to the brèche of the Third ronchey Tower and first climbs the 450m "Direttissima - Gianni Comino Memorial Route" gully or "Phantom Direct", ascended in 1985 by Giancarlo Grassi, Renzo Luzi and Mauro Rossi. Where Grassi & C. traveresed left, Plein Sud conitnues direct for circa 250m up the central couloir to a large chimly which hides a wedged gully which poses some ice and dry-tooling. The four climbed the route after having bivvied the night before close to the Bergschrund but above all after an in-depth study of the wall. After having waitined for years for the right conditions they finally seized the moment, that one which enabled them to climb an otherwise elusive wall.

Plein Sud inherits the vision of Grassi and Comino, that "crazy" and in seom respects "insane" passion for ghost gullies, those which - the name itself gives it away - only come into condition in very particular moments. If ever. In short: this was a moment which not only had to be seized, but which also had to be interpreted correctly. One final detail which gives an indication to the importance of the route: Plein Sud is only the 5th ascent up the South Face of the legendary Grandes Jorasses! Prior to this group, the face had been climbed by Guido Alberto Rivetti, Francesco Ravelli and Evariste Croux (1923); Albert Rand Herron with Evariste Croux once again (1928); by Alessandro Gogna and Guido Machetto (1972) and by the above mentioned Giancarlo Grassi, Renzo Luzi and Mauro Rossi (1985).