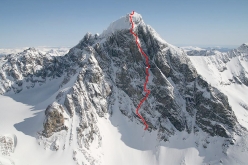 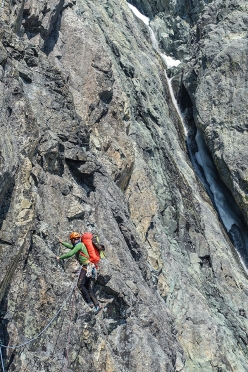 Michael Rinn leading on day 1, 4 August 2017, of the first ascent of Game of Thrones (ED2, 1250m) up the South-West Pillar of Monarch Mountain, Canada
Photo by Simon Richardson

Michael Rinn on 6 August 2017 on the summit ridge of Monarch Mountain, Canada
Photo by Simon Richardson 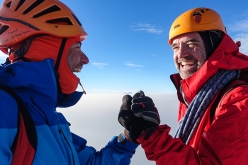 Michael Rinn and Simon Richardson on the summit of Monarch Mountain, Canada, after having made the first ascent of Game of Thrones (ED2, 1250m), the first route up the SW Pillar
Photo by Michael Rinn

The trip report by Simon Richardson who from 4 - 6 August together with Michael Rinn made the first ascent of Game of Thrones (ED2, 1250m), the first route up the South-West Face of Monarch Mountain (3572m) in the Coast Mountains of British Columbia in Canada.

The Canadian Coast Mountains extend for 1600km up the Pacific Coast of British Columbia from Vancouver to Alaska. The highest and most famous peak is Mount Waddington (4019m), a challenging summit, that receives only a handful of ascents each year. Monarch Mountain (3572m) lies 70km north of Waddington and is rarely climbed, perhaps once every three or four years. Away from the Waddington massif, Monarch is the second highest mountain in the range and there is no higher summit until you reach Mount Fairweather on the Alaska border 1000km to the north.

I first saw Monarch on the horizon when climbing in the Waddington group 20 years ago and resolved to climb it one day. There were rumours of a huge unclimbed south-west face, but the mountain is normally climbed from the east (via the 1936 first ascent route) and few people had ever seen this side of the mountain. Then in April 2007, pilot and mountain photographer John Scurlock took a remarkable series of aerial photographs of the peak that he published on the Internet. This revealed the south-west face in all its detail and a compelling line up a twin set of pillars leading directly to the summit. At 1250m-high, it was one of the biggest unclimbed walls in the range.

Several teams have targeted the route in the last ten years, but weather and difficult planning intervened. So this summer, Micha Rinn from Germany and I decided to make an attempt. We flew in by helicopter on 28 July (the normal way of approaching the Coast Mountains nowadays) and climbed the route from 4 to 6 August. The climbing was mainly on rock and involved 42 pitches up to 5.10a with 400m of moving together on easier ground. Unlike the Waddington Range that is mainly comprised of excellent granite, Monarch is formed from a metamorphosed volcanic. This provided very solid rock in the upper half of the route, but protection was difficult to find and we had many long run outs. We descended the West Face route that was first climbed in 1953 during the second ascent of the peak.

We called our route Game of Thrones and graded it ED2. Overall the scale and difficulty was similar to the Walker Spur on the Grandes Jorasses, but the route was more serious. We would not have been able to retreat from above half-height because the difficult-to-find protection would have exhausted our rack of gear.

The 1250m-high south-west face of Monarch can be divided into three sections. The lower two sections are defined by pronounced spurs, but rather than follow the crest of the first spur, Game of Thrones climbs a series of walls to its left. The second spur is the steeper of the two and leads to the apex of the wall, roughly level with the foot of the hanging 'roof' icefield of the West Face route. Above, the third section follows a lower-angled ridge directly to the summit.

The first section starts up a left-trending ramp before following the left side of the central gully system that retains (in high summer) three significant areas of snow - the Hidden Icefield, the Triangular Snow Patch and the Great Icefield. Start by descending 150m from the Monarch-Page col and traversing horizontally across broken rock, snow and scree to reach the foot of the face at 2320m. The route was climbed in 32 pitches with 400m of moving together.

Section 1: Climb two pitches to the start of the ramp (5.8) and continue easily up the ramp for 150m and cross the central gully system. Five pitches up walls and grooves (up to 5.8) to the left of the gully lead to the deeply enclosed Hidden Icefield. Cross the icefield to its top right side and climb a steep hanging groove (5.9) cutting through the back wall to an easing. Traverse slightly down and left across the central gully and climb steep walls (5.9) to the Triangular Snow Patch.

Climb slabby ground on the left side of the snow patch for two pitches (5.8) to gain a pronounced rib that leads up towards the steep second spur. Climb the rib for two pitches, bearing right at its top (5.10a) to reach the girdling ledge below the second spur at c.2800m (bivouac).

Section 2: The wall above overhangs so move right along the dwindling ledge for 30m until just above the Great Icefield and break through the roof above at its narrowest point (5.10a). Continue first slightly right for two pitches (5.9), then left for a pitch to gain an open corner system. This leads (5.8 then 5.9) to a large snow field where the angle temporarily eases (13 pitches in all from the bivouac ledge).

Continue easily up the crest for a pitch to a right facing corner. Follow this up and right (5.7) then bear left up a ramp to the crest. Move left 10m and climb a steep hidden groove (5.9) to where the angle eases. A pitch of easier ground leads to the top of the second spur at c.3300m (5 pitches from the large snow patch).

Section 3: Move easily up to the upper lower-angled ridge and follow it for 200m to the upper snow slopes (bivouac). Move right up snow and climb the final broad gully to exit on the summit ridge just left of the summit (70m).