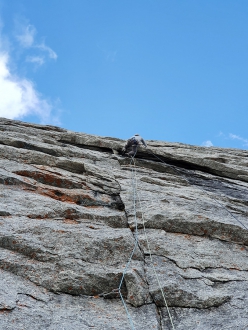 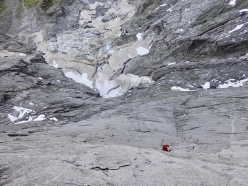 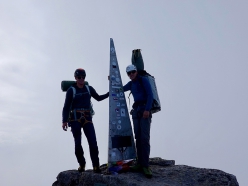 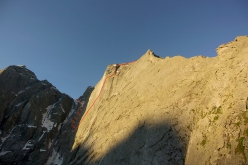 Swiss climbers Marcel Schenk and David Hefti have climbed Via Nardella up Piz Badile, opened in 1973 by Daniele Chiappa, Giulio Martinelli, Tiziano Nardella and Elio Scarabelli in 1973. Hefti and Schenk onsighted all pitches, except for two which were climbed free by the second.

Precisely 46 years after the first ascent of the east northeast Pillar of Pizzo Badile, know more commonly as Via Nardella or even Via 50°, Swiss alpinists Marcel Schenk and David Hefti have reclimbed these historic 800 meters on the left side of the mountain’s famous NE Face.

First ascended with the use of compression bolts by Daniele Chiappa, Giulio Martinelli, Tiziano Nardella and Elio Scarabelli from 9 to 13 September 1973 past difficulties up to ED, VI, A3, this route to the left of the famous Via Cassin has seen precious few repeats, perhaps only two, including the historic first winter ascent carried out from 30 December 1983 to 4 January 1984 by Antonello Cardinale and Danilo Valsecchi.

Hefti and Schenk know the NF Face of Piz Badile like the back of their hands - the mountain guides established the Northeast supercombo connection at the end of 2016 while a few weeks earlier Schenk and Simon Gietl had made the first ascent of Amore di Vetro - and they waited patiently all summer for optimal conditions. Just when the season seemed lost an opportunity arose and on 17 September they made their way from Rifugio Gianetti up the mountain’s south face to reach Colle del Cengalo, from where they descended the chossy Klucker gully; luckily this was covered in snow, ensuring that the 7 abseils were less prone to rockfall.

The aim was to attempt the first free ascent of the route and after sharing the first two pitches of Hiroshima (Valentino and Rossano Libera, 1993), the start proved relatively straightforward until the center of the face where the real difficulties began in earnest.

"The old pegs and compression bolts were anything but reliable. They could be partially removed by hand or simply broken with just one blow of the hammer. The situation required total concentration. We tried to add pro as best as possible with nuts and friends. It was the psychological stress that took us to the limit, rather than the pure difficulties of the climb."

The eleventh pitch in particular proved to be the crux, both physically and psychologically, and instead of following the direct line of compression bolts up the featureless slab Hefti opted for a more natural, highly exposed variation to the left, past difficulties estimated around 7b+. At this point the two stopped and spent the night on the face on their portaledge, before reaching the summit at around midday the next day. The last section proved more difficult than they had anticipated since the upper reaches were often plastered in snow.

Hefti and Schenk added two bolts only, placed by hand to reinforce two belays. They swung leads and the leader onsighted all pitches except for pitch 7 (6c+) and 10 (7a+) which were climbed free by the second.

"It would be a great, but huge challenge to lead the entire route free in a single day. In order to do this you need to really strong mentally." Hefti told planetmountain.com after the climb. "We always led 2, maximum 3 pitches before switching leads, because we were so drained psychologically that we were happy to sit back and let the other climber take the live end of the rope. Good teamwork proved essential."

Schenk added "The rock is perfect, top quality granite, we didn’t have to clean almost anything. The route itself is a brilliant, but somewhat serious, undertaking and even at the time of its first ascent the climbers must have really pushed themselves. Yes, theirs was a really interesting ascent."