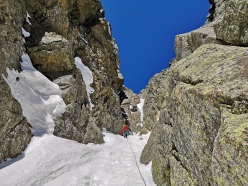 Piz Buin East Face: Tito Arosio in the starting couloir while climbing a new route with Rosa Morotti on 31/03/2019
Photo by Rosa Morotti 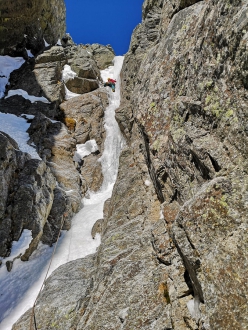 Tito Arosio climbing ice on the lower section of the new route on the East Face of Piz Buin, established on 31/03/2019 with Rosa Morotti
Photo by Tito Arosio, Rosa Morotti 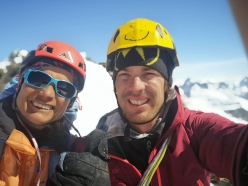 Rosa Morotti and Tito Arosio after having established a new route up the East Face of Piz Buin, Silvretta, on 31/03/2019
Photo by Tito Arosio, Rosa Morotti 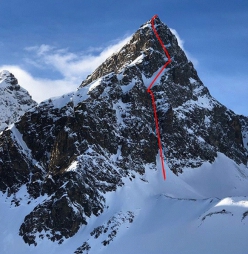 On 31/03/2019 Tito Arosio and Rosa Morotti made the first ascent of a new route up the East Face of Piz Buin (3312m) in the Silvretta group of the Rhaetian Alps. Arosio reports

On Sunday, 31 March 2019 Rosa Morotti and I had the pleasure of establishing a new route up the East Face of Piz Buin, a famous mountain in the Silvretta massif straddling the border between Switzerland and Austria. The Silvretta group is extremely famous for the Haute Route ski mountaineering itinerary that runs through it but, bar its normal routes, is less commonly associated with actual mountaineering.

At present we have no information regarding previous mixed climbs on the east face of Piz Buin, and we've had this confirmed by the Tuoi hut warden and various alpinists from Graubünden.

The rock is good quality and compact and is suitable for summer climbs, too; the hut warden told us he had ventured up the east face twice in summer, encountering good rock on each occasion. Our climb is likely to share one or two pitches with one of his routes.

Our East Face mixed outing is super logical, so much so that when I first saw it four years ago, I immediately asked myself if it had already been climbed. Thomas Wälti, a talented mountain guide who knows the Graubünden mountains like the back of his hand, immediately replied he believed it had never been done in winter before.

The climb is split into 3 sections: the couloir to reach the snowfield in the middle of the face, 4 pitches of snow and ice up to 90°, a 30-40° snowfield, and the last section of mixed climbing (5 pitches) which presents classic mixed climbing (M4) up very compact rock of mediocre quality.

We climbed up to SE pre-summit, and were separated from the summit by a 500m flat ridge. We abseiled down the route, equipping the belays and down climbing the snowy sections.

15.03.2011
Piantobaldo, new route on Monte Presolana in memory of Camos and Piantoni
On 11/03/2011 Yuri Parimbelli, Tito Arosio and Ennio Spiranelli carried out the first ascent of Piantobaldo (600m, WI 4 M7 A1) up the NW Face of the Western Presolana and dedicated their route to the late Bruno "Camos" Tassi and Roby Piantoni.