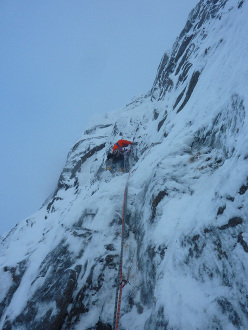 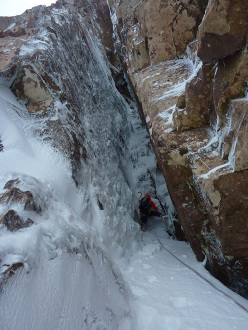 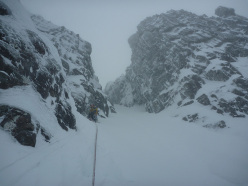 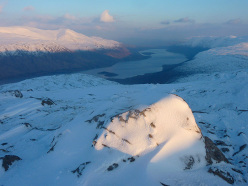 Tito Arosio from Italy reports about the BMC International Winter Climbing Meet that took place in Scotland from 26 January to 2 February 2014.

A week of mixed climbing in the heart of Scotland. A week of continuous rain, snow and wind. A week in close contact with alpinists from Britain and from the rest of the world. A week with 4 hours of sleep per night and really difficult wake-up calls. This, in short, was my BMC International Winter Meet.

This year I was lucky enough to be chosen by the CAAI (Italian Academic Mountaineering Club) as their sole sole representative for the BMC International Winter Meet 2014. I set off knowing therefore that I'd be the only Italian and that I wouldn't know anyone; it would be an exciting opportunity to meet others and share different visions of climbing. I arrived in the evening of January 26 along with all the other climbers at Glenmore Lodge, the base camp of the Meeting, in the heart of Scotland. There were lots of climbers there, 40 from 27 different nations and just as many hosts, namely local British climbers.

The Meet started properly after dinner with a lecture by Simon Richardson who talked about Scottish winter climbing in general. My hands start to sweat and I began to look forward to the next day and try this for myself. After the conference, good beer in hand, I got to know Malcolm, my host, ie the British mountaineer who would climb with me during the next few days. We were practically the same age.

At midnight we decided what we'd climb the next day and obviously I didn't have the slightest idea about the climbing areas and in particular I knew nothing about the grades which seemed completely incomprehensible. I relied totally on Malcolm and as he sorted his rack, I noticed with horror that he decided to take only a few friends and plenty of nuts and huge hexes.

While talking to the other climbers I realised that the group was really diverse and ranged from my pleasant roommate, who had only ever used ixe axes a couple of times, to superbly expert climbers such as Nick Bullock and Will Sim, two of the best climbers in the UK.

At last morning arrived, Malcolm and I drove to Stobe Coire Nan Lochan (if you're not Scottish the names are almost all unpronounceable). We got out of the car in cheerful drizzle: it is quite normal to set off in the rain to climb an ice climb or mixed route. Which is what we did, and as we gained height we reached the frozen level, which is where the rain transforms into snow and ice.

Below the face the visibility was very poor, there was spindrift everywhere, Malcolm uttered "real Scottish conditions today" which got me excited. We started up Scabbard Chimney, in theory a mixed climb but unfortunately it was almost completely covered in ice: although the climbing was much easier, it was a lot harder to protect that in normal conditions!

Meanwhile, beyond our GoreTex "armors", the storm continued to rage. We climbed the route without any major problems and the most beautiful thing I discovered - and venerated for the rest of the week - was the Bulldog, a sort of mini ice ax blade that is hammered into the cracks clogged with ice and grass. This really is a great invention and it enables you to easily protect otherwise critical situations.

Malcom had obviously made the right decision not to bring too many Friends, all the cracks were filled with a couple of millimeters of ice that would have made them unreliable. Hexes hammered into these cracks worked far better.

The day came to an end and we returned to Glenmore Lodge just in time for dinner. The first thing to do though was to hang out all our clothes, so that they wouldn't be too wet the next morning. Dry was out of the question because of all the humidity.

Every night there was a different conference, accompanied by the classic British humor. After the conferences we went to the bar and over a couple of beers we decided what to climb the next day. One beer is even called spindrift, so I can rightly state that spindrift was the Leitmotif of my trip to Scotland, both during the day and at night!

The week passed by quickly, one route after the next was climbed, all great, only the wake-up calls became more and more difficult due to our long nights at the bar! The atmosphere was fantastic, we got the chance to talk to everyone, the average age of both the hosts and guests was 27, just like me, and this really surprised me as I'd expected most to be a lot older. In the middle of the week we then changed host and I partnered up with Neil, a nice climber from Sheffield.

Choosing what to climb and where was made difficult this year to the large amounts of snow that resulted in an unusually high avalanche danger. The best crags were located in the NE of Scotland, almost 2 hours drive away, resulting in particularly long days. Often at most teams didn't return in time for dinner.

The week ends with a fun party that lasts well into the night, making waking up the next day even harder! After a quick breakfast all the participants leave the lodge and head to airport or the station. We all feel slightly melancholy.

And so after a week I return home feeling richer than before, happy to have understood the basic notions of British mountaineering : it doesn't matter how high the face is, what is important is to seek and find adventure. And Scottish winter climbing is a master for this!

Thanks to the CAAI that provided me with the opportunity to experience this wonderful week, and to the BMC for having thought of and organised this meeting.

And thanks to Grivel, Grande Grimpe and Wild Climb for the gear.