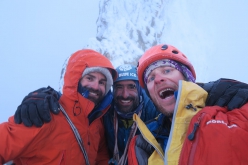 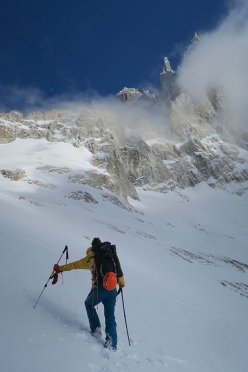 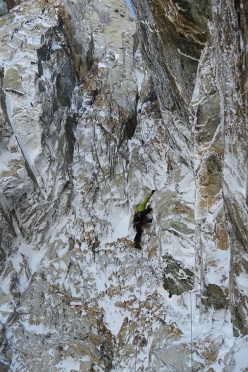 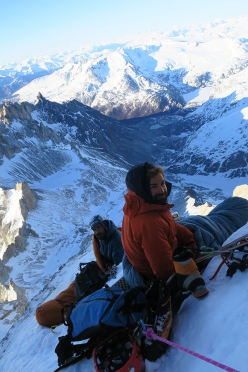 In Patagonia close to Cerro San Lorenzo alpinists Martin Elias, François Poncet and Jérôme Sullivan have made the first ascent of a previously unclimbed tower. Called El Faro, it was climbed alpine style via their new route La Milagrosa (1200m, A3, M7, 6a).

Alpinists Martin Elias, François Poncet and Jérôme Sullivan have pulled off quite a coup in Patagonia with their first ascent of a striking 1200m needle described in 2014 by Colin Haley as possibly "the most difficult unclimbed mountain in Patagonia?"

The huge tower lies next to Cerro San Lorenzo and had been attempted previously by various parties, including Argentinian climbers Luciano Fiorenza and Pablo Pontarielo who were forced to turn back after a few hundred meters due to constant rockfall. It was during his 2014 ascent with Rob Smith that Haley defined El Faro as such, and their ascent of the smaller adjacent Aguja Antipasto is a direct reference to their peak "being dwarfed by the main course behind."

Elias, Poncet and Sullivan had travelled to Patagonia to try their luck on the East Face of Cerro San Lorenzo, renowned as one of the biggest unclimbed challenges in Patagonia, but due to prohibitive conditions they soon turned their attention to what they would later call El Faro. Despite good weather they failed to forge a line up the mountain’s North Face due to the huge seracs on the upper section of the route. Disappointed but by no means defeated they made their way to the other side of the mountain and it was here that they immediately noticed "a logical line up the cold south face."

After waiting for a four-day storm to abate, they set out on 18 October and, having played a dangerous game of hopping across plates of ice managed to cross lake Laguna de los tempanos, they established ABC below the mountain’s east face.

Sullivan recounts "It was 10 when we started climbing. The forecast had announced south high pressure system until the next night. 48h. After some technical mixed climbing on good rock we accessed the snow and ice ramp that we had spotted on the scouting trip. We unroped and quickly climbed the 500m-600m ramp that gave access to the steeper part of the face. Our fast pace up this section let us hope we could sleep at the col. But as we reached the end of the ramp and roped up again we realized the poor snow conditions, bad rock and lack of ice would slow us down a lot. As night caught up with us, i was climbing the first 30m of what turned out to be the crux of the route: an 80m chimney of vertical snow covered rock, of which words lack to describe the lack of quality. Choss really doesn't cover it. "Un asco" as the locals say!"

The trio fixed 30m of difficult dry tooling and aid climbing, abseiled down to the icy slope and chopped small ledges were they spent the night. They continued climbing early they next morning, past poor quality rock and ice throughout the rest of the day. After moving onto the North Face they followed a further three pitches of rime covered rock to reach the summit just as night fell and the clouds engulfed the mountains.

"Having doubted the whole way of our capacities to reach the summit, with the fresh snow, the terrible rock and obviously the weather which in our experience on San Lorenzo was always much worse that forecasted, this was truly a magical moment." The trio descended slowly through the night, reaching the base at dawn. Commenting after his ascent, Sullivan stated: "It is not specially nice, having bad, unprotectable rock, but it's unique settings in the heart of the giant San Lorenzo,and the human adventure make it, with out a doubt, a climb I will long remember."