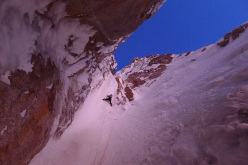 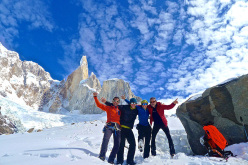 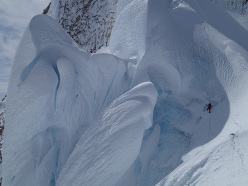 An international team comprised of Santiago Padros and Dani Ascaso from Spain and Lise Billon and Jérôme Sullivan from France have established a difficult new route up the South Face of Cerro Adela Norte, the mountain which with its three distinct summits - Adela Sur, Adela Central and Adela Norte - acts as a formidable "guardian" of the flanks of Cerro Torre in Patagonia.

The initial aim was to climb a new line through the South Face of Adele Norte and join up with the West Face Ragni Route close to the Col de la Esperanza, the Col of Hope, before continuing on to the summit of Cerro Torre. A sort of supebr enchainement therefore, similar to the one carried out in 2007 by the Americans Kelly Cordes and Colin Haley who climbed À la recherche du temps perdu (Andy Parkin, François Marsigni, 1994) to then follow the Ragni Route to the summit. It’s worth noting that in the past only Padros had stepped onto Cerro Torre’s famous summit rime mushroom, in 2005 after having repeated Cesare Maestri’s Compressor Route.

On the first day the four alpinists set off at a leisurely pace and reached the Niponino camp after 9 hours. The next day they negotiated their way through the contorted Adela glacier towards the base of the South Face of Cerro Torre and Cerro Adela, where they rested for a few hours.

On 23 October they crossed the Bergschrund at 03:00 and after simul-climbing for a short distance to the left of À la recherche du temps perdu they then began the true difficulties, climbing a WI 5+ pitch described as "special" in the dark.

Four pitches of good ice lead to the crux of the climb, another two difficult and tiring pitches. They then climbed the obvious 200m couloir and as darkness set it they climbed away from the main difficulties. After some exposed snow slopes they reached their highpoint at 03:00 am, slightly above and to the south of the Col of Hope, 12 hours behind schedule and 26 hours after having set off.

Sun greeted the alpinists early on 24 October but as Padros writes "our physical condition and the chance of a sudden change in weather advised us to descend to Circo de los Altares and begin the 30km hike back to the closest road!" The four abseiled towards Col of Hope and then needed two days, walking 12 hours each, to return to El Chalten via Passo Marconi.

"On the South Face of Cerro Adela Norte" wrote Padros "we have left a new route called Balas y Chocolate, 900m, ED+ or, using modern grades, WI 5+, A2, M6+, X. A repeat is recommended at the start of the season of during the coldest days. The first pitches are exposed to ice falling from the seracs and ice mushroom above."

Cerro Adela Sur and Cerro Adela Central were climbed for the first time in 1958 by the Italians Walter Bonatti and Carlo Mauri, a few days after their failed attempt up the West Face of Cerro Torre which, in 1974, would then become the famous Via dei Ragni. In 1988 the Argentines Eduardo Brenner and Silvia Fitzpatrick carried out the first ascent of Cerro Adela Nord.