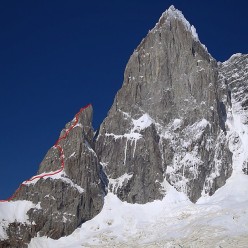 Aguja Antipasto on the left with the line Romance Explosion climbed by Colin Haley and Rob Smith (500m, 5.10R, M5R) and the huge, unclimbed tower on the right.
Photo by Colin Haley, Rob Smith 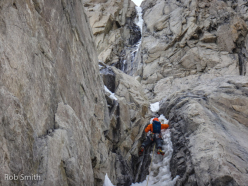 Yet another austral summer, yet another trip to Patagonia for Colin Haley who this November teamed up with Rob Smith, not to climb in the Chalten massif as usual, but instead in the wilder San Lorenzo massif in northern Patagonia. Tempted by the allure of plenty of huge unclimbed lines, the duo had their sights set primarily on set on the massive rock tower located at southern end of the south ridge of San Lorenzo, at 3706m the second highest mountain in Patagonia.

After the arduous approach and waiting out bad weather, the two Americans left their glacier bivy on 20 November intent on climbing this striking, unclimbed line which they believe may be at least 1000m high. Unfortunately terrible conditions forced them back that same day but, with time running short and despite being low on food, they decided to attempt the tower below and immediately to the east of the main spire. Although just 500m high and "dwarfed by the main spire" this tower "would look proud in most other surroundings."

Haley and Smith set off on 21 November at 2:00 am from the bivy to negotiate the 500m approach buttress below that led to the central section of the route. This followed an ice gully, up very poor ice, before climbing poor rock past difficulties up to 5.10 to reach the spectacularly sharp summit. Haley and Smith then abseiled down the line of ascent, setting up all belays in the process and returning to the bivy circa 22 hours after having departed.

Commenting after the ascent, Haley noted "Better ice conditions would've made for both a higher-quality climb and technically easier ascent, but we were quite happy to finally get a chance to climb." The duo called the spire Aguja Antipasto and their route Romance Explosion, the names being a direct reference to their tower" being dwarfed by the main course behind."

After resting for two days Haley and Smith then attempted to repeat the South African route up the ENE ridge of Cerro San Lorenzo but after ascending for 600m to reach the Bergschrund, were once again forced back by bad weather.

Concluding his trip report on his blog, Haley explained "Our perspective would certainly be different if we’d had better luck with the weather, but both Rob and I felt unsure if we would want to return to Cerro San Lorenzo. The heavy pack hauling is the biggest detraction for me. However, there is no lack of very big, difficult objectives there, for those who have the "hunger" required to climb there." For the record, with reference to that enormous, 1000m+ unclimbed face, Haley asks himself whether this might be "the most difficult unclimbed mountain in Patagonia?"

For more information and photos check out www.colinhaley.com