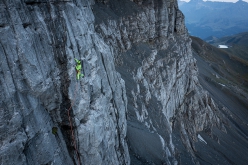 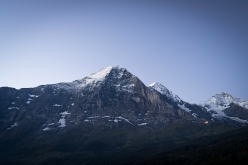 The North Face of the Eiger
Photo by Christoph Muster 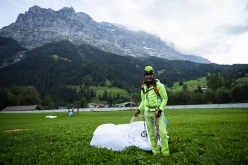 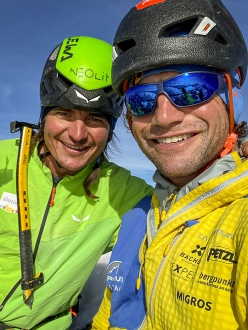 As part of their North6 project to climb the six most famous north faces of the Alps while cycling between the mountains, Roger Schäli and Simon Gietl have now climbed Chant Du Cygne on the Eiger.

After Cima Grande di Lavaredo and Pizzo Badile, Roger Schäli and Simon Gietl have now climbed the north of the Eiger. As reported, the two are climbing the six most famous north faces of the Alps and using only their bikes or paraglider as means of transport, and after having pedalled 678 kilometers and gained 7,343 meters in altitude, the two now repeated climbed not the classic Heckmair route as one might have imagined, but the 7a Chant Du Cygne. They fixed the first pitch two nights ago, and set off at 5am up Schäli's home mountain, topping out 16. From close to the characteristic mushroom they paraglided down to the valley and are already on their way towards Zermatt, next stop the Matterhorn.