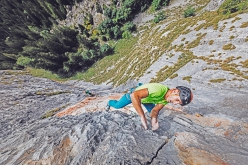 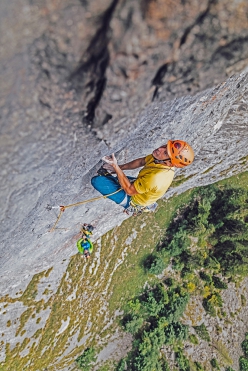 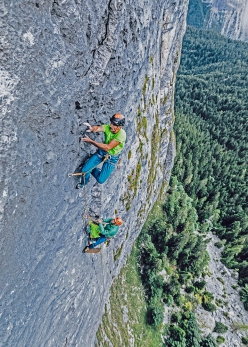 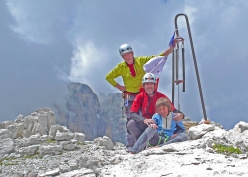 On Cima Cee in Val di Tovel, Brenta Dolomites, Rolando Larcher and Luca Giupponi have made the first ascent of Fine di un’Epoca, the end of an era, dedicated to Larcher’s father Renato. Larcher provides the report.

Whenever I look for a name to call one of my routes, I always choose something that reminds me of sensations and emotions tied to that particular moment. Every new route is new wrinkle on my face, is testament to a life lived intensely, worth being remembered.

Fine di un’Epoca, the end of an era, is the name I suggested to Luca Giupponi even before starting our project up in Val di Tovel. He knew precisely what I was referring to and graciously accepted. I’d already used this name for a sport climb at the crag Padaro, to recall a drastic change that happened at work. Now though the "drastic" change was unfortunately in my family and this was the only name that seemed to describe how I felt.

After my father’s devastating stroke in April, nothing will ever be the same as before. One parenthesis in life ended abruptly and another needed to be opened somehow. Just the simple act of going back into the mountains needed to be rediscovered, and I owe this great love to him. This is how Luca and I started our new route, my father in hospital in critical conditions, telephone close at hand and overcome by guilt. I was in dire need of escaping from reality and I knew I had his unconditional approval. He has always been proud of my love for the mountains, and he’s always shown this in a silent, discreet manner that resembles his character. No chitchat, but help whenever needed: he often tagged along to belay me, other times he’d carry gear back down the mountain, somethings he’d give me a lift in his 4x4.

My insecurity pervaded the start of this new route, but perhaps because of this I seemed to appreciate even more the discovery of something new, our friendship, the ambient. I recall moments of joy and an uplifting feeling of renewal. The first pitch was waiting for us, I’d established in 2017 with Zio Tibia: Marco Curti. From then on though, the "puzzle" became increasingly complicated: first a repulsive bombè, then a very smooth slab all the way to the top. Decidedly discouraging question marks which we hoped to unravel, thanks to the previous routes we’d established on this very particular sheet of grey limestone.

The bombè on pitch three was Luca’s, and he deciphered it in an exemplary manner to create the route’s crux pitch as we had expected. It’s a fantastic sequence of underclings and technique, with feet smeared on absolutely nothing! The remaining pitches required another two days of effort as we navigated our way across superb rock: four consecutive 7c’s followed by a finishing 7b. Pure fun and plenty of climbing, it’s amazing what mother nature can offer! Luca and I topped this with the first redpoint which happened to be my best present on my 54th birthday.

Fine di un’Epoca is dedicated to my father Renato who, despite everything, is still resisting against the real "difficulties" of life. His love for the mountains is an integral part of why this new route, and the so many others I’ve established across the globe, have come about.