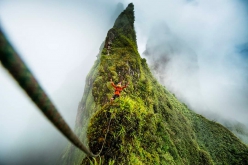 PORTFOLIO / gallery Portfolio: Mike Libecki and his climbing in the Choss Whisperer by Cheyne Lempe

Using an attempt to climb a remote jungle tower on the island of Ua Pou close to Tahiti in French Polynesia as a pretext, film director Cheyne Lempe provides masterful insight into veteran American climber and explorer Mike Libecki. Some of the archive footage is extraordinary, just as Lempe’s ability to scratch below the surface and delve into what, after all these years and 60+ expeditions to some of the most remote and exotic corners on the planet, motivates Mr. Libecki truly.