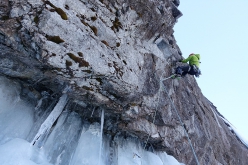 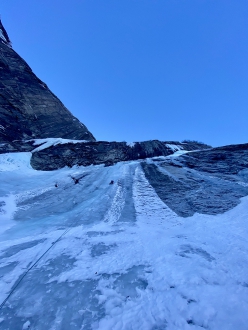 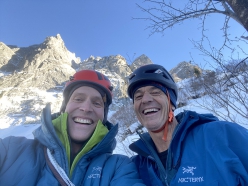 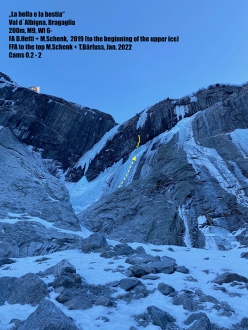 Marcel Schenk has completed a mixed climb he started in 2019 together with David Hefti In Valle Albigna, the wild side valley of Val Bregaglia in Switzerland. Located at the foot of Piz Balzet, two years ago Schenk and Hefti made it to the beginning of the upper ice before retreating as the ice was not connected to the rock and therefore too dangerous.

After waiting patiently Schenk has now returned with Bärfuss and the pair succeeded in climbing the entire line to establish La bella e la bestia, Beauty and the Beast. The 200m line beaches difficulties in the region of M9, WI 6-. The first 20 meters are protected by 7 bolts, while the rest of the route, including the belays, must be equipped with trad gear.

"The rock is very compact and accepts little pro" the Swiss mountain guide told planetmountain, "while all the hooks are natural."

03.10.2019
Pizzo Badile Free Nardella climbed by Marcel Schenk, David Hefti
Swiss climbers Marcel Schenk and David Hefti have climbed Via Nardella up Piz Badile, opened in 1973 by Daniele Chiappa, Giulio Martinelli, Tiziano Nardella and Elio Scarabelli in 1973. Hefti and Schenk onsighted all pitches, except for two which were climbed free by the second.