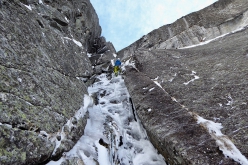 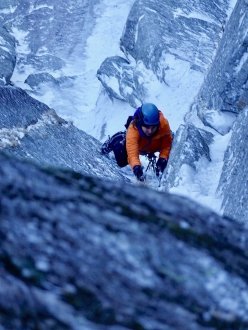 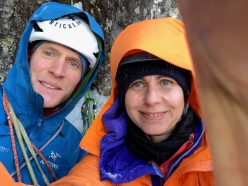 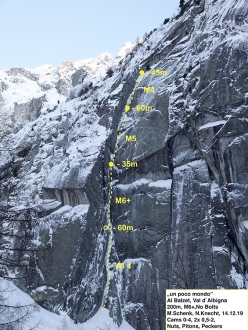 On Mt. Al Balzet in Valle Albigna, a side valley of Val Bregaglia in Switzerland, Natascha Knecht and Marcel Schenk have made the first ascent of a new mixed climb called Un poco Mondo.

On 14 December 2019 Swiss alpinists Natascha Knecht and Marcel Schenk made the first ascent of Un poco Mondo, a 200m ice and mixed route climbed onsight and without bolts past difficulties up to M6+. Earlier this year Schenk repeated Free Nardella up Pizzo Badile while in the past winter seasons he forged Amore di Vetro and Nordest Supercombo up the same mountain. He has now sent planetmountain.com the following report.

We set off from Pranzaira with enough gear for an adventurous day up in the mountains. We had various ideas in mind and our hopes of finding a great line were high thanks to the rainy autumn.

Our first potential line didn't actually look that great when we got up close, the ice was too thin and the rock too compact. Instead, we shifted our focus to the various side valleys of Val d’Albigna, especially since I knew from climbing here in summer that on Mt. Al Balzet there’s a corner that remains wet even after long dry spells.

Since the line wasn’t visible we had to make our way up the approach and much to our surprise there beautiful icy couloir had formed on the lower section. We’d found it, our tiny world we could immerse ourselves in that Saturday.

The first pitch was pure pleasure: great ice that we managed to protect with short ice screws as well as perfect cams that accepted nuts and friends. After 60m we reached a ledge and established a perfect belay with a friend #1 and #0.75 and a peg.

Difficulties proved relentless on pitch 2 and got more exciting the higher we climbed. Uncertainty, climbing into the absolutely unknown, is what makes a first ascent such a fascinating prospect. After about 35 meters there was no more gear left on my harness and the time had come to establish another belay. Luckily the rock took plenty of gear. Two pegs and an ice screw were ample for Natascha to second.

The environment was astounding, deep within this wild and lonely valley. The following two pitches were still exciting and rewarding, but difficulties eased considerably. The face gradually eased off and the corner disappeared. We decided to end our route there and savour what we’d just experienced.

After three abseils and down climbing ten meters we returned to our rucksacks. On our way back we chanced upon a few chamois while some bearded vultures soared high up in the sky. A great day in an amazing area with still holds huge potential slowly came to an end.

03.10.2019
Pizzo Badile Free Nardella climbed by Marcel Schenk, David Hefti
Swiss climbers Marcel Schenk and David Hefti have climbed Via Nardella up Piz Badile, opened in 1973 by Daniele Chiappa, Giulio Martinelli, Tiziano Nardella and Elio Scarabelli in 1973. Hefti and Schenk onsighted all pitches, except for two which were climbed free by the second.