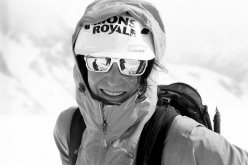 The short film about Lydia Bradey, the mountaineer from New Zealand who in 1988 became the first woman to climb Mount Everest without supplementary oxygen.

Ten years after Reinhold Messner and Peter Habeler set the gold standard for Himalayan mountaineering and became, on 8 May 1978, the first to climb Everest without supplementary oxygen, New Zealand’s Lydia Bradey walked in their footsteps and on 14 October 1988 she became the first woman to summit the highest mountain in the world in the purest of styles.

Bradey had just turned 27 and, after her teammates had failed on the South Pillar, she decided to attempt the more popular Southeast Ridge route following other teams operating on the mountain, but essentially on her own. She climbed from Camp 2 to Camp 4 on the 13th and continued early on the 14th from the South Col, lagging behind a Spanish team that was using supplementary oxygen. Despite climbing solo and not having fixed ropes she persevered, past the South Summit and Hillary Step, to reach the main summit at around 4 pm. She returned, utterly exhausted, to her tent well after nightfall. All on her own on the South Col, she rested until noon the next day and then descended to Camp 2, before returning safely to Base Camp on 16 October.

Bradey’s lone, oxygen-free ascent was so remarkable that, unfortunately, it was greeted with absolute disbelief by some and consequently shrouded in controversy and bitter dispute, also because Bradey had climbed without a permit for the South Col route and initially retracted her summit claim out of fear of being banned from the mountain for 10 years. She accepted a 2-year-ban, but later reinstated her summit assertion. An end to the controversy was made when even the New Zealand Alpine Club Association accepted her groundbreaking ascent.

Bradey’s achievement on Everest came about after years of climbing in New Zealand's Southern Alps paved the way for a successful, oxygenless ascent of Gasherbrum II in 1987. Since then the qualified international guide has reached the summit of Everest on five further occasions with clients, and her climbing spans the globe. Her fascinating story is told in this excellent short documentary.