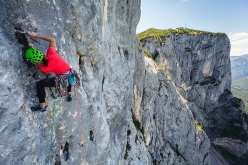 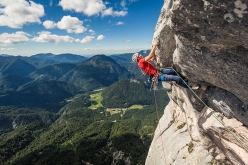 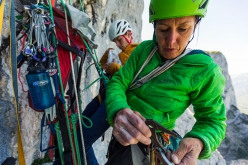 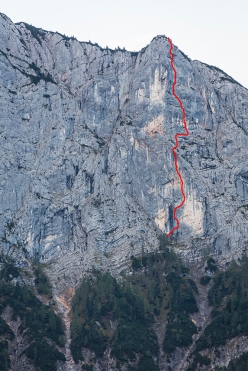 Luka Lindič and Ines Papert have made the first ascent of Wolke 7 on Hintere Feuerhörndl at Reiteralm in the Berchtesgaden Alps in Germany.

Most summers see Slovenia’s Luka Lindič and Germany’s Ines Papert heading off on climbing expeditions to the Greater Ranges, but this year instead of travelling to Alaska the two stayed close to home for obvious reasons.

Their backyard mountains are the Berchtesgaden Alps, more precisely the Feuerhörn at Reiteralm which can practically be seen from their hometown. It is on this compact limestone wall that Lindic repeated End of Silence in 2019, and it was while working this route that his eyes drifted across towards the obvious big overhanging corner. The line seemed obvious and the duo soon set to work, establishing 12 pitches ground-up with trad gear as much as possible and bolts only where necessary. After establishing the route the duo returned and Lindič succeeded in making the first one-day redpoint, grading the 380m outing IX+/X-.

The new route has been called Wolke 7, the German expression for cloud nine, and unsurprisingly so: shortly before the ascent they got married.

Route name: Wolke 7
Location: Reiteralm, Hinteres Feuerhörndl
Difficulty / length: IX+/X-, 12 pitches, 380m
Fixed gear: Mix of bolts, pitons (bolted belays)
Gear needed: set of cams #0.2 – #3, 10 quickdraws Notes: all belays equipped with two bolts. 17 bolts were placed on the 12 pitches. One of these bolts was added to pitch 11 after the first free ascent, to lower the risk in case the flake one needs to climb broke off. All pegs were left in-situ, repeat ascensionists need only a set of cams. It is important to note however that  climbers need to know how to place the cams well in limestone to stay safe in this route

20.08.2019
Silvo Karo, Luka Lindic add Franček Knez memorial route to Široka peč
On the North Face of Široka peč in Slovenia’s Julian Alps, Silvo Karo and Luka Lindic have made the first ascent of the striking Pillar in memoriam of Franček Knez.