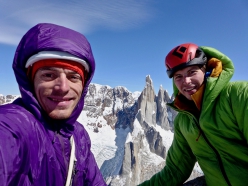 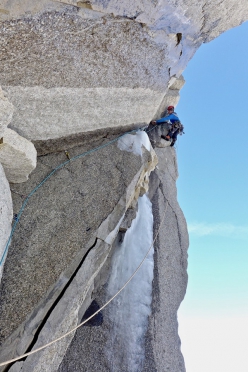 Mir, Aguja Saint-Exupéry, Patagonia: the pitch that was the last question mark because we didn't see what lies above the roofs.
Photo by Luka Krajnc 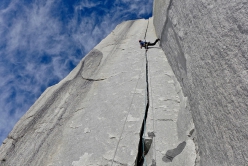 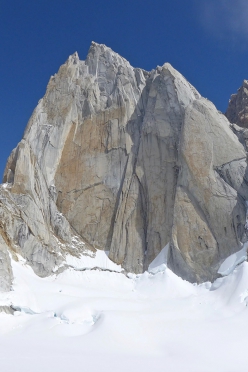 Interview with Slovenian alpinists Luka Lindič and Luka Krajnc after their first ascent of Mir, a new climb up Aguja Saint-Exupéry in Patagonia.

Towards the end of February 2020 Slovenian mountaineers Luka Krajnc and Luka Lindič established a difficult new climb up the south face of Aguja Saint-Exupéry in Patagonia’s Fitz Roy massif. This starts up a 1994 attempt the Argentines Marcelo Galghera and Horacio Gratton and climbs 500m of new terrain with difficulties up to 6c/A3 before following Petit Prince to the summit. The two, who in the past have climbed many of the hardest in the Alps together, succeeded on their second attempt and with two bivies.

Luka and Luka: we haven’t seen you climbing together for a while. In the past though you’ve done some great stuff together such as Divine Providence and Rolling Stones, to name just two.
Lindič:
Yes, with Luka we started alpine climbing together in a town of Celje, Slovenia. At the beginning we "collected" numerous easy routes in Slovenia and built a solid foundation. After this we joined forces on some of our best alpine climbs in the Alps and we always worked out great as a team. Both of us have a very similar ethics and idea about climbing style. I believe we demonstrated this clearly on the two ascents you mentioned. I dare say that Rolling Stones might still be the hardest/most consistently difficult alpine mixed climb in the Alps and has yet to see a second totally free ascent the way we did it.

This season you decided to join forces in the Cerro Torre & Fitz Roy massif
Krajnc:
We still have some unfinished business there.

Both of you had climbed here in the past
Lindič:
It was my 4th time, for Lukas Krajnc it was his third time down there. Luka already established three new routes on Fitz Roy, El Mocho and Mojon Rojo while I until now had only repeated some of the classics and spent a winter season mostly skiing.

Slovenians have a long tradition of difficult routes in Patagonia…
Krajnc:
Yes, definitely. We still have a strong reputation mostly because of Silvo Karo, Janez Jeglič and Franček Knez. They definitely climbed some of the biggest, most serious routes in the range. Hudičeva Zajeda on the East Face of Fitz Roy, Peklenska Direttissima and Cara Sur on Cerro Torre and Psycho Vertical on Torre Egger are just four that spring immediately to mind

You chose to concentrate your efforts on Aguja Saint-Exupéry. Why this mountain?
Lindič: The conditions for our plan A never developed good enough so we started looking around for a plan B. Something steep, relatively safe and sheltered from the wind… the south face of Aguja Saint-Exupery seemed like a smart project and an attempt we read about in the guidebook looked promising. We decided to check it out and immediately liked the wall and its quiet ambiance.

The attempted was made in 1994 by the Argentines Marcelo Galghera and Horacio Gratton. What did you know about their efforts?
Krajnc: From Rolando Garibotti we got the info that the party had mentioned some bad rock, but that was it.

You needed two attempts. Tell us about the first.
Lindič: This went well despite the relatively cold temperatures and lots of ice in the cracks. We climbed the first six pitches, found a few bolts from the first attempt party and then continued for another three pitches to reach a perfect bivy spot at the base of an obvious corner. On the same day we climbed and fixed two more pitches for a faster start the next day. The next morning we quickly jummared up our rope and started climbing a long and steep traverse into the big overhangs. The weather was perfect but we reached a point where we didn't want to commit to the terrain above us. We only had a single rope, a 5mm tag line and a few pitons left. The line looked possible with a bit of luck but there was no way of knowing. Because of the long overhanging traverse above us we realised that a retreat would be too risky if we continued with the little gear we had, so we turned around. We didn't think of trying the route again and carried everything back to town.

But you returned
Krajnc: Back in El Chalten the route played in the front of our minds and we begin considering a second attempt. We started to collect gear from others as we hadn’t brought enough from home. Rolando Garibotti and Thomas Huber generously lent us all that we needed and we were ready for the second round. Taking more gear was the only change in our tactics. This included one extra rope to fix the overhanging traverse dihedral until we could see if we could get through it. In case that didn't work, the fixed rope would make the descent easier while descending the overhanging terrain.

How did things go?
Lindič: Because of the heavy snowfall before the spell of good weather, we encountered more snow on the first pitches and ice in the cracks. But because we already knew the climbing, we still managed to reach our high point relatively quickly on our first day and even added one more pitch. We used the same tactics as previously, fixing ropes and returning to the comfortable bivy spot after pitch 9 as on the first try.

How much did you climb free?
Krajnc: Because of new snow and a lot of wet sections we didn’t focus on free climbing. Knowing that the crux of the route was still ahead of us we decided to climb as efficiently and safely as possible. But the route follows crack systems, most of which we believe would be free climbable in drier conditions. Also the overhanging part offered amazing sections which would probably go free, and probably no harder than 8a. After we joined the Petit Prince route, there is a short overhanging A2 corner that we’re not sure if it goes free, but we are also aware that once you start aiding, the perspective changes and it’s hard to switch back to the free climbing mindset. So maybe someone else will discover just that and remove the question mark from the free climbing vision.

A3. That’s quite something, way out there in those mountains…
Lindič: We were never really skilled aid climbers, so it took us 4 hours to get through that pitch.The fact that it’s really overhanging and the top part was soaked with water didn't help to speed up progress. It started with some safe hooking and continued with mostly pitons and cams. But in general the pitch is relatively safe and should you fall, you’ll land in the air anyways.

If you had to do it again, what if anything would you change?
Krajnc: Not much, as we think our tactics were really good and we had enough of the right gear. We would probably not take the additional rope for fixing the traverse, as we now know it is possible, but when you're going in the unknown terrain of that steepness, there is a lot of questions in the head that need answering. That adventurous spice is just what we were looking for and gave us the motivation to search for the answers.

Mir. Peace. Why this route name?
Lindič: Firstly because it didn't give us a peace of mind after the first attempt. We sensed that there might be a way through, but both agreed we weren't prepared to accept the risk of committing with the gear we had. Going up for the second attempt, we knew that nothing could be taken for granted and we might end up going home without a single climb, but nevertheless we both agreed that it provided us the right drive to give it our best as we knew we’d enjoy the experience no matter the result. Secondly, during our time down in Patagonia we saw a lot of people trying the same routes or faces, which is not the experience we wanted to have. Being alone on wild terrain is still the best and most pristine sensation we seek together in the mountains.