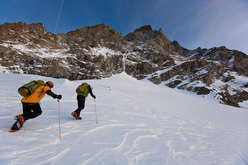 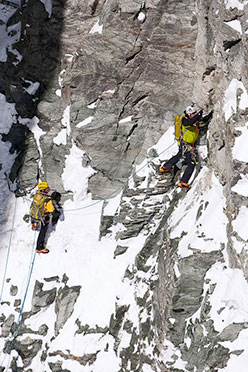 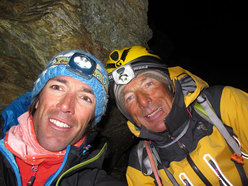 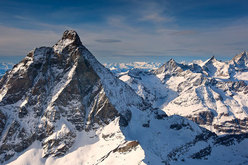 The Matterhorn
Photo by Damiano Levati / The North Face

Linea Continua, the film by Hervé and Marco Barmasse on YouTube

Hervé Barmasse has published 'Linea Continua’ on YouTube, the film about the new route he established on the South Face of the Matterhorn with his father Marco. First ascended in 2010, it is still unrepeated.

1200 meters high, a climbing partnership comprised of 2 mountain guides who happen to be father and son. A couloir, Enjambée, which "splits" the South Face of the Matterhorn in two forming an ideal line that had never been climbed before. A story of mountains and mountaineers. This is the story of a family that has handed down, from one generation to the next, the art of climbing and being mountain guide. The protagonists are Marco Barmasse (the father) and Hervé (the son). The action took placed on 17 March, at the end of a winter 10 years ago. Their story is told in the 17 minutes of "Linea Continua", a film that touches on issues that run far deeper than the new route they established. The film is about a love for the mountains, a family bond, a deep rooted tradition, and also a common direction, passed down from father to son, explored and surpassed together. Just like a continuous line. Just like life itself.

"The mindset was the same as ever." Hervé Barmasse told planetmountain.com a decade ago immediately after the first ascent. "We were as excited as two beginner alpinists, happy to live out our biggest love on the most beautiful mountain in the world. Seeing that there was so much powder snow we knew we might have to turn back immediately but we didn't really care because after so many years we finally climbed together again, played our cards right to succeed in something new."

20.04.2017
Hervé Barmasse, Shisha Pangma and the lure of unpredictable mountaineering
Interview with Hervé Barmasse, the Italian alpinist and Matterhorn mountain guide who together with Germany’s David Göttler will attempt a new route up the South Face of Shisha Pangma (8027m) in Tibet. Should things go according to plan this would be Barmasse’s first 8000er.

21.04.2011
Hervé Barmasse, the new Matterhorn route and the exploration of the Alps
On 9 April, after 4 days on the wall and three bivvies, Hervé Barmasse reached the summit of Picco Muzio via a new 700m route up the great pillar located on the South Face. This is the first stage in a trilogy to explore the Alps during which Barmasse plans to climb Mont Blanc and Monte Rosa.