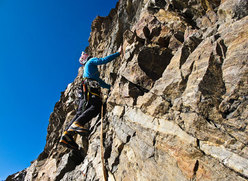 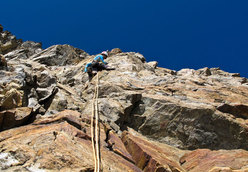 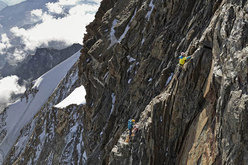 On 30 September Hervé and Marco Barmasse established a new 800m line up the SE Face of Monte Rosa. This third stage marks the end of Hervé Barmasse's project entitled Exploring The Alps.

800 new meters up the SE Face of Monte Rosa. Established on 30 September by Hervé and Marco Barmasse from Valtournenche, father and son, both mountain guides. This, in its own right, is newsworthy. But we must add that the two mountaineers chose to explore the great SE Face of Mone Rosa - that space to the left "Africa Nostra" established in 1987 by Silvio Mondinelli, Fabio Loss and Paolo della Valentina - which had remained up until now "curiously" unexplored. And we also need to state that this ascent is a "grandes course", up terrain where you need "good intuition and balls" not only for the terrain it covers (the route starts at 300m and finishes on Punta Gnifetti at 4554m) but also because of the mixed rock and ice which certainly cannot be defined as being "solid". And, last but not least, to give an idea of the difficulties, Hervé described it as being "classic mountaineering" past maximum difficulties somewhere in the region of grade VI, with all that this entails climbed in mountaineering boots and in the high mountain environment. With all these details, the news could surely be complete. Naturally though, as you will have gathered, this isn't the case.

The most interesting aspect of all is that with his new route Hervé Barmasse has now completed his Exploring The Alps, his three-stage tour across the alpine peaks. But let's quickly hit the rewind button. It all began last April on the Matterhorn, more precisely on Picco Muzio, with the new route first ascended solo. This was followed by the great gallop through the magnificent heart of Mont Blanc, alias the Brouillard Pillars along with Iker and Eneko Pou. And now this final adventure with his father Marko. Three new routes, on three symbols of the Alps. Three different ways of interpreting what Hervé describes as being the very same alpinism: alpinism in its most classic form, comprised of discovery and uncertainty.

The solo up Picco Muzio "was the hardest test" says Hervé "where I really had to come to terms with myself". The "race" with Iker and Eneko on La Classica Moderna was "a great experience of pure joy, fun and friendship in an outstanding ambient." And now, on Monte Rosa, the route is "perhaps the least demanding of the three" but is a return to a family partnership already experimented during the first ascent up the South face of the Matterhorn which renewed "truly special emotions, difficult to describe..."

Perhaps this is also why Hervé and Marco chose a particular "approach" to the SE Face of Monte Rosa: on 29 September they spent the night at the Balmenhorn bivvy (4167m), the next day they ascended to Col Sesia and to reach the base of the route there they descended the (by no means simple) gully Canal Sesia. Compared to the classic approach all this is much shorter harder, but also somewhat harder... Which makes you wonder whether this is yet another way of continuing to explore, of continuing in the main aim of the project. Or rather, in the "sense" of this three-part journey.

In the end, it is the true sense of the journey which seems to us to be the essential part of the "news". Hervé told us that the theme of his Exploring The Alps was alpinism. That form of alpinism which finds "pleasure in taking to the mountains which future alpinists will have to rediscover by looking at the mountains with different eyes." A view cannot but include the Alps and, above all for those who live in Italy and have peaks at the doorstep from "Mont Blanc to the Marmolada, via the Matterhorn, Monte Rose, Badile and a thousand others." This is a real treasure which at times we seem to forget and which, thanks to the Hervé Barmasse's little-great undertaking, is now brought to the forefront once again.