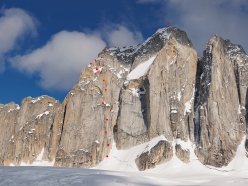 The line of The Pace of Comfort on the NW face of Kichatna Spire in Alaska. The route was first ascended by David Allfrey, Whit Magro and Graham Zimmerman from 23-27/05/2022
Photo by Oliver Rye 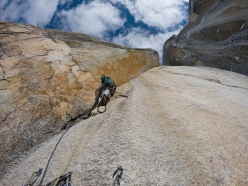 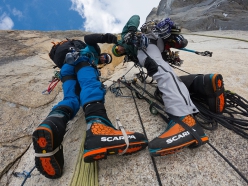 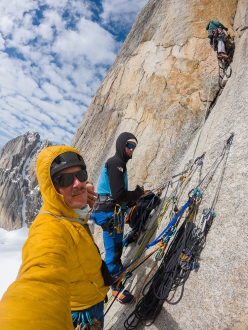 The Kichatna Spires are a small clutch of exceptionally steep peaks 70 miles west of Denali. In his 1966 report on the spires - David Roberts stated that "no other area combines heavy glaciation, remoteness and bad weather with such an abundance of vertical walls, pinnacles, and obelisks." During his 1966 expedition to the area, two of his teammates made the first ascent of the highest peak in the range, the 8985-foot peak via its East Ridge - they named the mountain Kichatna Spire.

In the years since the first ascents made on the peak have represented some of the most technical ascents in the Alaska Range, and only one of these has successfully ascended the peak's dramatic Northwest Face. This ascent of The Ships Prow by Andrew Embick and Jim Bridwell in 1979 was on the cutting edge of applying Yosemite big wall tactics to the big mountains.

The other routes on the Northside of the peak (off the Cul-de-Sac Glacier) are The Voice of Unreason (2005) which did not reach the summit, and the Wharton/Smith Couloir (2008) to reach the 1966 route, which is on the far left-hand margin of the face. Many other attempts had been made on the peak's Northwestern Wall, including one in 2008 by Zimmerman alongside Ian Nicholson and Ryan O'Connell.

The team, including videographer Oliver Rye, flew into the Cul-de-Sac Glacier on May 22nd in clear weather with an excellent forecast. After setting up basecamp and scoping the route, they got to work on the route's initial pitches. On May 23rd, Magro led two 70 meter pitches of sustained rock climbing (C2 and 5.10). That evening they returned to camp with two ropes fixed on the wall. The following day, Allfrey led a 68 meter pitch of technical A3+ beaks followed by a stunning 50 meter C3 leaning corner. Above this, Zimmerman led a 45 meter mixed corner (C2, M6). At this point, they reached the snow ledge dubbed "the triple ledges." Again, they fixed lines through these initial pitches and returned to camp.

Due to the arc of the arctic summer sun, they climbed late in the day, departing basecamp at noon and reaching the base of the wall at 1 pm to take advantage of the sunlight on the wall that lasted from 3 pm to 12 am.

After resting and packing on the 25th, they launched on the route at 10 am on the 26th, ascending their ropes and pulling the ropes behind. From "Triple Ledges", Magro led a sustained 230-foot A3 pitch. Allfrey then led the two 50 meter pitches of C3 to the top of the upper headwall. On the final moves stepping off the the headwall, Allfrey took a 40-foot whipper when a cam placed in poor rock failed. Up to that point, the climbing was sustained vertical and overhanging terrain. Finally, after eight massive pitches of climbing, the terrain leaned back. From there, Magro was able to climb around an M6 chockstone left of the final headwall to reach a small bivy chopped in a snow field on which the team was able to sit out the bright Alaskan night.
The following morning (the 27th), Zimmerman led five pitches of high-quality mixed climbing with difficulty up to M5 to reach the summit ridge under clear skies. Magro then led along the moderate and stunning summit ridge to reach the peaks T-O-P. They summited the peak at 4:17 pm on Friday the 27th.

Their descent went quickly, and they arrived back at basecamp with all of their equipment just before midnight.

The route required all of the skills gained from the team's numerous expeditions around the world - in Magro's words - "this climb was a culmination of 70 years of climbing experience between the three of us."

The name The Pace of Comfort comes from a statement made by pilot Paul Roderick when he picked the team up on the glacier. Looking at the weather, he said, "With these kinds of conditions, we're able to fly at a pace of comfort." The climbing team felt the same way about their ascent.

The team would like to thank: Tincup Mountain Whiskey for covering the flight onto the glacier, Jackson Yip and Jack Tackle for forecasts, Bob Kaufman for route images, Talkeetna Air Taxi for the ride into the Cul-de-Sac and all of the team's sponsors, including SCARPA, Black Diamond, Outdoor Research, Mystery Ranch, Blue Ice, Edelrid, Julbo, Exped USA, Gnarly Nutrition, Skratch Nutrition, First Ascent Coffee and Trailbutter. And most importantly, thanks to the team's families.