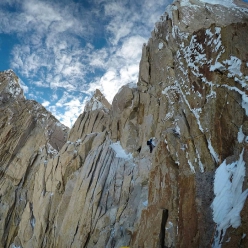 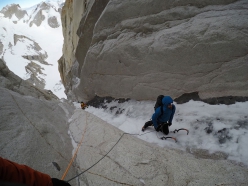 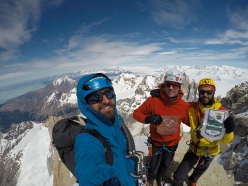 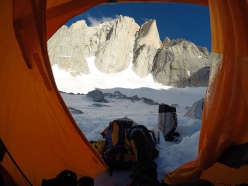 On 21 November the aspirant mountain guides Guides Federico Secchi, Federico Martinelli and Michele Colturi departed from Italy for their first taste of Patagonia. After briefly checking the weather at Buenos Aires the trio realised that unexpected weather window was about to home in on the El Chalten region.

After a day of feverish search for information, they focused on the west face of Fitz Roy. The wall is crossed by the elegant line first ascended in 1965 by the Argentineans Carlos Comesaña and José Luis Fonrouge. In its 1600 meters this phenomenal climb embraces all styles (ice, mixed and rock) past difficulties up to 85°, V+). This is a true natural masterpiece that captures the attention of all mountaineers.

Having set off from El Chalten, they made the 6-hour approach and reached the base of the route where they spent in night in a tent on the glacier. A second team composed of two Argentinian guides and a client joined them shortly afterwards. The following day the set off at 2:00 am and immediately realised that conditions were extremely dry, forcing them to proceed slowly up the first part of the gully. The Argentines turned back after circa 1000m. At the end of first day, after about 19 hours of non-stop climbing, they reached an altitude of 3000m where they bivouacked.

The next morning they completed the last pitches across the traverse and up the finishing ramps, past very little snow to reach the 3400m high summit. After a few minutes of rest they quickly began the endless series of rappels to return to the base of the mountain. High temperatures made the descent particularly slow.

According to the team, this is only the second repeat of Supercanaleta this season. Conditions in Patagonia seem somewhat unusual, with unexpected heat waves and low rainfall. Ice on numerous mixed routes is almost non-existent or extremely dry, quite the opposite therefore to what it usually is like at this time of year.

To date, some of the main peaks of the group have been ascended (Aguja de l’S; Poincenot; Aguja Saint-Exupéry; Aguja Guillaumet) while the summit of Cerro Torre, which thwarted an Argentine and a French team, remains unclimbed so far. Colturi, Martinelli and Secchi will remain in Patagonia for about a month and a new window of good weather has been forecast for these upcoming days.

The team thanks Cai Valfurva

05.12.2011
Supercanaleta Fitz Roy, Patagonia
Some climbs seem timeless due to their importance in the history of alpinism. One of these is certainly Supercanaleta on Fitz Roy in Patagonia. The story by Damiano Barabino, Sergio De Leo, Marcello Sanguineti.