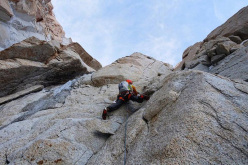 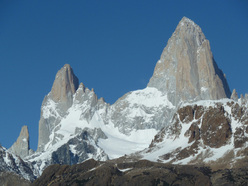 American alpinists Colin Haley and Andy Wyatt have made an astoundingly fast ascent of Fitz Roy in Patagonia, requiring just 21 hours and 8 minutes to climb the mountain via the Supercanaleta route and descend via the French route and return to the starting point.

America’s Colin Haley and Andy Wyatt have made an astoundingly fast ascent of Fitz Roy, climbing the iconic 3405m Patagonian peak in a round-trip that lasted just 21 hours and 8 minutes. After driving from El Chalten and parking the car at the Río Eléctrico bridge, the two set what is believed to be the fastest car-to-car record by climbing the classic Supercanaleta (1600m, 80°, 5+) on the mountain’s West Face before descending via the South Face French route.

Haley and Wyatt had no pre-cached gear. They started walking at 10:15 pm and reached the Bergschrund at 3:40am. The summit of the "smoking mountain" as the original Tehuelche people called their Chaltén mountain as it is often shrouded in clouds, was reached without difficulties at 11:14 am, and after descending safely they walked out of the Río Blanco valley and reached the road to stop the clock at 19:23.

According to local alpinist Rolando Garibotti of pataclimb.com this is likely to be the first one day ascent of Fitz Roy. In 2009, Jorge Ackermann, Tomy Aguilo and Milena Gomez completed the trip in 36 hours, while in 2014 Simon Gietl and the late Gerhard Fiegl required just 31:30 hours. Haley, who has summited 10 times in total since his first successful ascent in the 2005-2006 season, stated "It's merely a game, but it sure is fun!"


NB: On 01/02/1996 Simone Moro and Adriano Greco climbed and descended Supercanaleta on Fitz Roy in 25 hours (from base of route to base of route), including a short bivy in a crack. This fast ascent was carried out during their first visit to Patagonia.