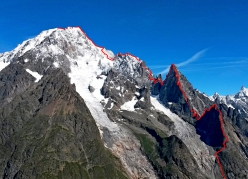 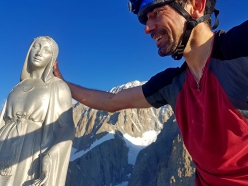 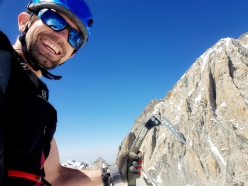 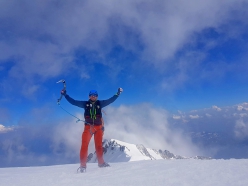 Polish mountaineer Filip Babicz has made a solo ascent of the Integralissima de Peuterey in the Mont Blanc massif in an astounding 17 hours. This is the first repeat of the 'Longest ridge in the Alps’, first climbed in full by the Germans Gottlieb Braun-Elwert and Rudi Kirmeier in 1973.

On 31 July Filip Babicz completed the Integralissima de Peuterey on the Italian side of Mont Blanc in an astounding 17 hours. As the Polish-born but Italian-resident mountaineer explains, the "longest ridge in the Alps" consists in climbing "the Peuterey Ridge from the bottom of the valley, where at 1840m the ridge starts and then continues via Mont Rouge, Tête de Chasseures, Aiguille Noire, Dames Anglaises, Aiguille Blanche, Grand Pillier d’Angle, Mont Blanc di Courmayeur and the summit of Mont Blanc at 4810m."

The Integralissima was first climbed by the German alpinists Gottlieb Braun-Elwert and Rudi Kirmeier over a period of three days, from 11 - 13 July 1973 and had not been repeated in its entirety. The figures are dumbfounding: 8000m long, over 4000m altitude gain, 900m of rappeling, constantly on technical terrain in the high mountains. Babicz’s time - a mere 17 hours as stated - is so fast it defies comprehension.

On the summit Babicz happened to meet François Cazzanelli and Francesco Ratti, on their way to completing the Super Integrale de Peutèrey. After enjoying the summit for about an hour Babicz took his time and made his way down the Normal route on the French side of Mont Blanc. Details will follow in due course.

CRESTA INTEGRALISSIMA DI PEUTEREY Yesterday, on July 31st, I soloed "The longest alpine ridge". It is the first solo ascent and the first repetition of this variant of Peuterey Ridge. The ascent was performed without neither any support nor deposits. What is more, the second part, from Aiguille Noire to Monte Bianco di Courmayeur had been unknown to me. . Integralissima di Peuterey, made by nature, dreamed by Preuss back in 1913, was passed for the first time in 1973 by german team Braun – Elwert and Kirmeier. It took the team 3 days, after a previous ascent of classic Integrale. This longest variant has remained unrepeated for 47 years, now repeat in solo and in only 17 hours! . Integralissima requires climbing the Peuterey Ridge from the bottom of the valley, where, near Frêney creek, on 1840m altitude the ridge starts and then it goes through peaks Mont Rouge, Tête de Chasseures, Aiguille Noire, Dames Anglaises, Aiguille Blanche, Grand Pillier d’Angle, Monte Bianco di Courmayeur back untill the top of Mont Blanc, 4810m. When it comes to numbers, this ridge has no competition throughout all Alpes. 8000m long, over 4000m altitude gain, 900m of rappeling. In relation to much more popular variant of Peuterey Ridge, the classical Integrale, it addes the traverse of two peaks: Mont Rouge and Tête de Chasseurs. As to compare the seriousness, longitude and difficulty of Integralissima to Integrale, it would be like at the beginning, before one can go forward, they would have to pass the notorious south ridge of Aiguille Noire twice! Mont Rouge ridges have nothing to envy their older sister and the time taken along with the seriousness of the climb itself compared to the south ridge of Aiguille Noire are virtually the same. For and see below in comment. #eliteclimb #formanaszczyt #polskizwiazekalpinizmu #polskihimalaizmzimowy #ebclimbing #wearebeal

01.08.2020
Mont Blanc Super Integrale de Peutèrey: François Cazzanelli, Francesco Ratti climb in the footsteps of Renato Casarotto
Mountain guides François Cazzanelli and Francesco Ratti have enchained the Ratti-Vitali route on Aiguille Noire de Peutèrey, the Gervasutti - Boccalatte route on Picco Gugliermina and the Central Pillar of Frêney, first climbed in 1961 by Chris Bonington, Ian Clough, Jan Duglosz, Don Whillans before proceeding to the summit of Mont Blanc. The so-called Super Integrale de Peutèrey, or Frêney trilogy, was climbed in 1982 by the great Italian mountaineer Renato Casarotto alone and in winter during an epic ascent that has gone down in the history of mountaineering as one of the all-time greatest climbs.