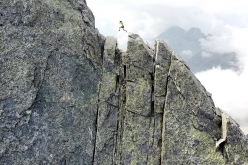 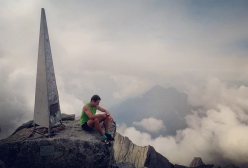 Filip Babicz on the summit of Pizzo Badile after having climbed the North Ridge in 42 minutes 52 seconds.
Photo by Vittorio Scartazzini 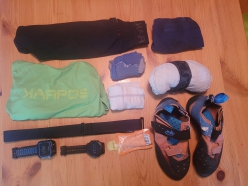 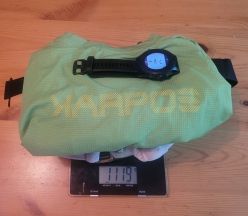 On Friday 10 September 2021 Filip Babicz climbed the North Ridge of Pizzo Badile in 42 minutes and 52 seconds.

Filip Babicz has defied comprehension with an astoundingly fast ascent of the North Ridge of Pizzo Badile in a mere 42 minutes and 52 seconds. Described as one of the best rock climbs of its grade in the entire Alps, this beautiful ridge line is graded IV+/V- and was first ascended by Swiss alpinists Walter Risch and Alfred Zürcher on 4 August 1923. The Polish mountaineer based in Italy set off at 13:00 from the col at 2590m below the start of the route and raced up the über classic, tagging the 3308m summit not even 43 minutes after having set off.

Babicz climbed with with hardly any gear at all, just some climbing shoes and chalk, as well as two watches (one on his wrist, the other as a backup in his pocket), shorts, a T-shirt and energy gels, weighing little more than a kilo. Obviously he knew the route well and the Friday climb came about after seven previous ascents.

Babicz is not new to feats of this magnitude, on the contrary, and apart from his cutting-edge dry tooling ascents these speed climbs are his hallmark. In August 2020 for instance he made a solo ascent of the Integralissima de Peuterey in the Mont Blanc massif in an astounding 17 hours, while a few weeks later he surpassed himself in soloing the South Ridge of Aiguille Noire de Peuterey in a blazing time of 1:30:14.

The 38-year-old Pole has dedicated his recent Badile ascent to Renata Rossi from Val Bregaglia and ever since 1984 the first Italian woman to become a guide. On his social channels he stated:

"It's DONE !!!! PIZ BADILE in 42'52"
Yesterday I managed to complete this important project! At 1:00 p.m. I started on the Northern Ridge of Piz Badile from the pass at 2590m with just one goal in mind: climb to the summit as fast as possible! 42'52" later I touched the metal cusp at 3308m! This important result is the new record time for this route, one of the most iconic climbs of the Central Alps and is the result of my intense preparation of the last few weeks. More details soon!
Thanks to all those who contributed to the realization of this project:
First @vittorioscartazzini and Marcello Rigamonti, my assistants on the summit, without your presence and your total support this project would not have been completed!
Renata Rossi and Franco Giacomelli, your deep involvement in this project was truly touching.
@patriarcamichela , @heikemschmitt and @valtuvince , your support made me resist the darkest moments during the preparation time.
Finally, I thank all the team of the @sascfura , together with Haidi you have contributed to making me feel more and more at home at the Badile's feet.
I would like to dedicate this record to Renata Rossi, the first Italian female mountain guide. I know this mountain and in particular this route means a lot to you and that it's much more than a vertical kilometer of granite. I understand your involvement well because my motivation to give 100% in this kind of project comes from within, it's important part of my soul. Thanks for your support!

Babicz is supported by: Karpos

06.08.2020
Filip Babicz speed solo ascent of Mont Blanc Integralissima de Peuterey
Polish mountaineer Filip Babicz has made a solo ascent of the Integralissima de Peuterey in the Mont Blanc massif in an astounding 17 hours. This is the first repeat of the 'Longest ridge in the Alps’, first climbed in full by the Germans Gottlieb Braun-Elwert and Rudi Kirmeier in 1973.