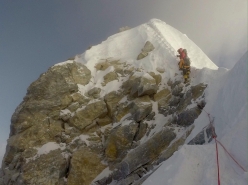 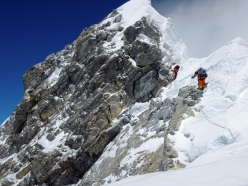 The famous Hillary Step on Everest, photographed on 18/05/2012 by Ueli Steck during his ascent of the highest mountain in the world
Photo by Ueli Steck 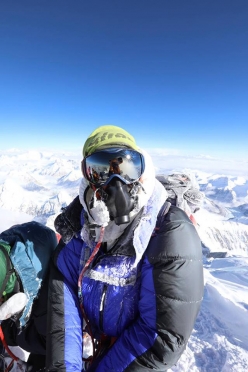 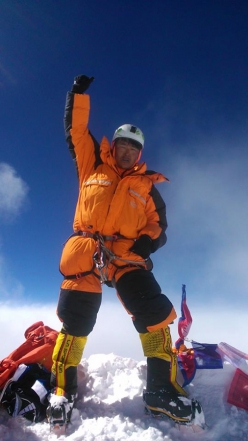 "The Hillary Step is no more." With these words Britain’s Tim Mosedale confirmed the hypothesis - put forward last year by some alpinists and rapidly confuted by others - that the famous Hillary Step on the SE Ridge of Everest has actually collapsed, probably as a result of the terrible earthquake that devastated Nepal in 2015.

Located at 8790m on the Nepalese side of the mountain, this circa 12m high rock barrier was first breached on 29 May 1953 by Edmund Hillary and Tenzing Norgay during the historic first ascent of the highest mountain in the world, while the two climbed the crest that leads from the South Summit (8750m) to the mountain’s main summit (8848m). This steep and narrow section constitutes one of the crux sections of the entire climb and is regarded as the final obstacle prior to reaching the summit. In the past long and dangerous queues have formed at this point and not just one, but two fixed ropes have at times been installed here to "ease the traffic", albeit without much success.

The other day Mosedale, who is currently guiding a commercial expedition on Everest, reached the summit for his sixth time and confirmed the change. On his return to Base Camp he published the photo pictured on the left and wrote "Not sure what's going to happen when the snow ridge doesn't form because there's some huge blocks randomly perched hither and thither which will be quite tricky to negotiate."

Further confirmation of the change came from Pemchhiri Sherpa, who told planetmountain.com "Yes, it has changed… before we had to climb the rock but now, after the earthquake, the route has changed and now we need to climb from the right." It’s worth noting that in this pre-monsoon season Pemchhiri helped install the fixed ropes up the SE Ridge route and the other day he scored his eleventh Everest summit.

In order to find out more we contacted Mosedale at Base Camp which is currently practically deserted, with more than 200 climbers making the most of the short weather window as they make their summit bid.

Tim, you stated the Hillary Step is no more. What do you base this on?

Having been up it a few times ... and getting there this year it's obvious that the feature is no longer there. Just rubble and debris where the tricky features used to be.

How much easier or harder do you feel it has become?
It's easier going up the snow slope (and indeed for inexperienced climbers and mountaineers there's less 'climbing' to be done making it much easier for them). However it's going to form a bottleneck. The Hillary Step often formed a bottleneck but some years they fixed and up and a down rope. In the current state it would be difficult to safely negotiate down where the step used to be on account of the huge unstable rocks that are perched on the route.

You formed part of the first group of climbers to summit Everest from the South this year, obviously after those who fixed the ropes. What style did you use?
Fixed ropes and oxygen. No one without oxygen on our summit day, but a few are preparing for an oxygenless ascents soon.

Can you briefly describe your own ascent?
It was great to be in the first summit wave after the fixers had completed the route. It was a small discreet summit bid after the main fixing plan has failed. The Gurkhas along with our team and the Maddison team collaborated to make the most of the small window of the 15th & 16th. The word got out so a few other teams tagged along (which was fine) but generally speaking it was a quiet day with great conditions.

This is your job, your leader of commercial expeditions that take clients up Everest. As such, is there anything you feel you wish to say to those who criticise this way of climbing Everest?
The fact that it's my job is something I personally find very rewarding. It's not for everyone and I have a lot of fellow Everest summiteer friends who would hate the idea of coming back with clients. To lead clients on an expedition without fixed ropes and without oxygen would be fairly irresponsible. People wanting to climb in that style would need to be hugely proficient and widely experienced with previous oxygenless ascents of 8,000ers under their belts. To that end they'd probably not be requiring the services of a leader like myself as they'd be totally independent in their own right.

30.09.2015
Nepal to introduce new Everest climbing restrictions
Nepal's government announced recently that is is considering steps aimed at easing overcrowding on Everest and making the highest mountain in the world safer for climbers.

25.04.2015
Earthquake devastates Nepal
Two earthquakes measuring up to 7.9 hit Nepal this morning causing, according to some sources, over 1,000 deaths. Even the highest mountains in the world trembled and an avalanche that swept through Everest Base Camp has caused an unknown number of deaths.

05.03.2014
Want to climb Everest? Only if you return with 8 kg of rubbish
New rules by the Nepalese government to climb to the roof of the world: the Nepalese authorities are enforcing all, alpinists and trekkers alike, who wish to adventure up the slopes of Everest to bring down at least 8kg of rubbish.