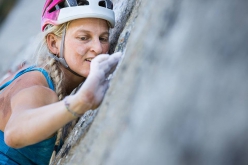 The video detailing the accident that occurred to Emily Harrington while attempting to free climb Golden Gate in a single day up El Capitan in Yosemite on 24 November 2019.

On 24 November top American climber Emily Harrington took a huge fall while attempting to climb Golden Gate on El Capitan in Yosemite. Harrington, who had free climbed the 41-pitch outing over six days in 2015, was attempting the route free in a single day with Alex Honnold and was low down on the climb early in the morning when she slipped and injured herself. In order to save time, the duo had been simul-climbing and this resulted in a fall which was far longer than usual.

Harrington was immediately lowered to a ledge and subsequently rescued by YOSAR (Yosemite Search and Rescue) before being taken to hospital. Thankfully the injuries the 33-year-old sustained turned out to be much less serious than initially feared and a day after the accident she was released from hospital. The details of this highly publicised fall and that fateful day are the subject of latest episode of the Vlog run by Harrington and her husband Adrian Ballinger.

I had an accident yesterday on El Cap. I’m banged up but gonna be ok thankfully. Not much to say except I took a bad fall and pin balled a bit then somehow hit the rope w my neck - All I know is that I am extremely grateful to have had @adrianballinger @alexhonnold @jonglassberg @sannimccandless @tarakerzhner and YOSAR of course there to get me out and help me through // thanks everyone who sent kind messages and thoughts - feeling so supported and loved // portrait by @tarakerzhner + neck selfie