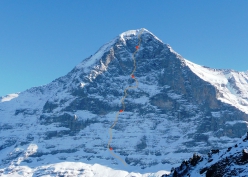 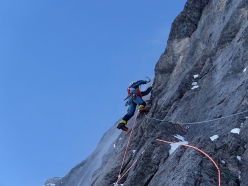 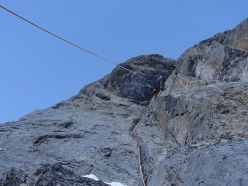 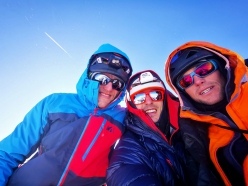 From 12 to 16 January 2022 the French mountaineers Leo Billon, Sébastien Ratel and Benjamin Védrines climbed the John Harlin Direttissima on the north face of the Eiger in alpine style and in winter.

Taking advantage of the exceptional high pressure system that enabled France’s Charles Dubouloz to complete the first winter solo ascent of Rolling Stones on the Grandes Jorasses, his compatriots Leo Billon, Sébastien Ratel and Benjamin Védrines climbed another great north faces of the Alps, the north face of the Eiger, via the John Harlin Direttissima.

This famous 1800m route was established from 18 February 18 to 25 March 1966 by two groups of climbers (American, British and German) who battled hard against prohibitive conditions. John Harlin lost his life while attempting to reach the summit, and it is in his honour that the route was named.

The first alpine style ascent, ie without the use of fixed ropes, was completed over a five-day period in October 1977 by Britain’s Alex MacIntyre and America’s Tobin Sorenson, while the first winter solo was carried out in 1990 in an extraordinary 27-hour push by Slovenian ace Slavko Svetičič who towards the end of the route, according to the High Mountain Military Group (GMHM), exited via the 1933 Heckmair route. This variation seems more than reasonable for those times and this option was subsequently chosen by several other parties. The first free ascent of the Harlin Direttissima up to the Heckmair was completed by Robert Jasper and Roger Schäli from 20 to 23 September 2010.

Billon, Ratel and Benjamin Védrines climbed from 12 to 16 January 2022 and made four bivouacs on the face. After the ascent, Billon explained to planetmountain "The conditions were pretty good for a winter climb. The difficulties lie in the quality of the rock encountered. Several sections proved to be unprotectable; the rock forms smooth steps turned slightly downwards into the void, not ideal for climbing with crampons... As is often the case in winter, the toughest pitches were the ones with modest grades, and not knowing what the chimneys held in store was stressful. But in the end everything went well!"

According to the elite GMHM Group to which Billon, Ratel and Védrines belong, the recent French climb is the first winter ascent of the entire route in alpine style. Ratel is rewarded for his perseverance: he climbed the Direttissima in winter 2016 with Max Bonniot and Pierre Labbre but at the time exited via the Heckmair.

HISTORY OF THE EIGER DIRETTISSIMA
by Lindsay Griffin

"The original ascent, one of the most famous in the Alps, was a tour-de-force siege of the 1,800m face over one month during late winter 1966.

Dougal Haston joined Americans John Harlin and Layton Kor to spend a considerable amount of the winter at the foot of the face, waiting for the right conditions and weather. However, around mid February they were surprised by a large and talented German team, comprising Karl Golikow, Peter Haag, Sigi Hupfauer, Jorg Lehne, Rolf Rosenkopf, Gunther Schnaidt, Gunther Strobel and Roland Votteler, starting up the wall ahead of them.

On the first summit attempt Hupfauer, Lehne, Strobel and Votteler had reached the Fly, and Harlin and Haston were jumaring up from the Death Bivouac to join them, when a free-hanging 7mm fixed line, just below the Spider, broke with Harlin attached. He fell the full length of the wall.

The remaining five climbers battled through horrendous weather for another three days to emerge on the summit, finishing the route as a tribute to the great American alpinist and naming it after him. Difficulties were rated at A3 and V+, with 80° ice and mixed, and the climb is now given an overall grade of ED3/4."

Lindsay Griffin
Highly reputable British journalist and mountaineer, compiler and editor of Mountain INFO, one of the world's most authoritative climbing resources.

17.08.2021
Dolomites Civetta coup: Léo Billon, Enzo Oddo climb Colonne d’Ercole in a day
Léo Billon and Enzo Oddo have climbed Colonne d’Ercole (1200m, IX) on Mount Civetta in the Dolomites onsight and in a single day. A few days earlier the French mountaineers had teamed up with Silvia Loreggian, climbing Specchio di Sara with the starting variant Coitus Interruptus and the Larcher-Vigiani (8a max, 600m) on Marmolada.

30.10.2010
Eiger Direttissima free, Jasper and Schaeli interview after the John Harlin route
From 20 - 23 September 2010 Robert Jasper from Germany and Roger Schäli from Switzerland carried out the first free ascent of the John Harlin Direttissima up the North Face of the Eiger. The duo exited via the Heckmair route and graded the undertaking Mixed M8-/rock 7a; E5; redpoint, 1800m.