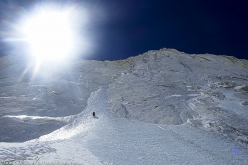 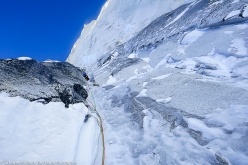 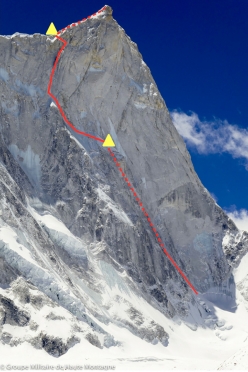 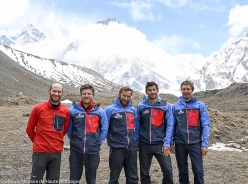 Three days only. This is the astounding speed with which French alpinists Léo Billon, Sébastien Moatti and Sébastien Ratel climbed the complex north face of Changabang, the spectacular 6864m summit located in the Garhwal massif in the Indian Himalayas.

First ascended on 4 June 1974 by a British expedition led by Sir Chris Bonnington vie the SE Face and subsequently the East ridge, the difficult North Face had long been described as one of the last major challenges in the Greater Ranges. It was finally resolved in 1997 by Andy Cave and Brendan Murphy who, climbing in alpine style for 10 days through prohibitive conditions, reached the summit on June 1 while their expedition companions Mick Fowler and Steve Sustad reached the summit ridge and Julia-Anne Clyma and Roger Payne stopped further down. While this ascent crowned the attempt carried out by Murphy and Perkins the previous year with Clyma and Payne, unfortunately the 1997 summit success was marred by a terrible tragedy. Having climbed the steep north face Steve Sustad fell from the ridge, down the south face, and although he stopped miraculously after about 100 meters he was injured in the fall. His climbing partners reached him and together they began the descent down the Normal route on the South Face of Changabang, but while 33-year-old Murphy was preparing an abseil at 6000 meters he was swept away by an avalanche and died. He was considered one of the best British alpinists of the 1990’s.

From 11 - 13 May 2018 the French Groupe Militaire de haute montagne mountaineers ascended a combination of the routes climbed in 1996 and 1997, tackling the 1200m climb and about 40 pitches with two bivouacs. According to their report, the trio stopped on North pre-summit before dealing with the "long and laborious" descent down to Pierre Sancier and Benoit Ginon at the foot of the immense rock and ice face.

The GMHM ascent comes in the wake of numerous importante climbs in the Greater Ranges. Standout climbs include the new route on Pangbuk North in Nepal in 2017 and the new route on Latok II in the Karakorum in 2012.

24.11.2017
Pangbuk North, video of the French route in Nepal
The video of Tolerance Zero, the new climb established by French alpinists Max Bonniot and Pierre Sancier up the North Face of Pangbuk North (6589 m) in Nepal.