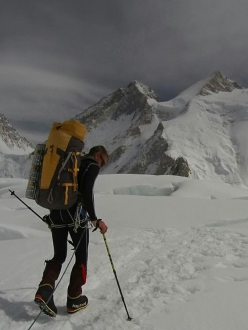 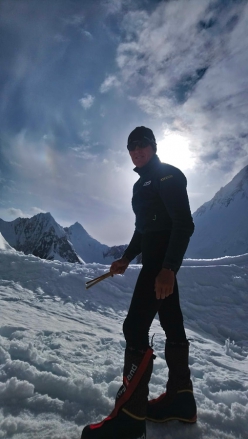 Denis Urubko has confirmed his reputation as one of the all-time greats of Himalayan mountaineering with his first ascent, solo and without supplementary oxygen, of a new route up Gasherbrum II. Currently the 46-year-old has returned from the 8032m summit and is now resting in Camp 1. He is expected to return to Base Camp this evening.

Obviously at present there are no precise details about the ascent, all that is known is that on 30 July he reached Camp 1 with some climbers including Don Bowie, with whom he had rescued Francesco Cassardo off Gasherbrum VII just a few days earlier.

Urubko's plan was to make a bid for the summit on 31 July, via a new route and in a single push, before desceniding down the normal route and joining up with the others at or around Camp 1.

Urubko knows Gasherbrum II extremely well. In 2001 he climbed this 8000er for the first time, while in 2011 he pulled off the historic first winter ascent of Gasherbrum II with Italy’s Simone Moro and America’s Cory Richards. On 18 July this year he summit again, as always without supplemental oxygen.

08.11.2016
Denis Urubko - my alpinism #2
The second video portrait of Denis Urubko, one of the strongest Himalayan mountaineers of the new millennium.

28.10.2016
Denis Urubko - my alpinism
The video portrait of Denis Urubko, one of the strongest Himalayan mountaineers of all times.

26.05.2014
Kangchenjunga from the North by Urubko, Txikon, Sinev, Bielecki and Braun
The summit of Kangchenjunga reached by Denis Urubko via the NW Face reveals a great chapter in alpinism and a great team effort which included the great mountaineers Alex Txikon, Dmitri Sinev, Artem Braun and Adam Bielecki.

04.02.2011
Gasherbrum II in winter: after the summit, descent to Base Camp with avalanche for Moro, Urubko and Richards!
Simone Moro, Denis Urubko and Cory Richards have now reached Base Camp after an arduous descent during which they were hit by an avalanche. This historic first winter ascent of Gasherbrum II (8035m, Karakorum, Pakistan) now draws to a close.

09.02.2009
Simone Moro and Denis Urubko: Makalu first winter ascent
The news is just in: at 14.00 (local time) Simone Moro and Denis Urubko reached the 8462m high summit of Makalu, carrying out the historic first winter ascent of the 5th highest mountain in the world.
09.06.2006
Himalaya: Urubko and Samoilov summit Manaslu via new route
On 8 May Denis Urubko and Serguey Samoilov summited Manaslu via new route up the NE Face.