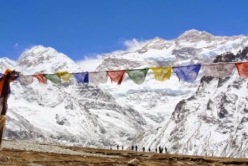 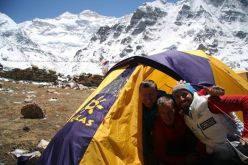 Kangchenjunga from the North by Urubko, Txikon, Sinev, Bielecki and Braun

The summit of Kangchenjunga reached by Denis Urubko via the NW Face reveals a great chapter in alpinism and a great team effort which included the great mountaineers Alex Txikon, Dmitri Sinev, Artem Braun and Adam Bielecki.

"Five alpinists did what a team of 10 - 15 people would have achieved". He who wrote this is Denis Urubko. The five are Alex Txikon (Basque country), Dmitri Sinev, Adam Bielecki (Poland), Artem Braun (Russia) and Denis Urubko (Kazakh naturalized Russian). What they achieved is the ascent of the NW Face of Kangchenjunga and in doing so they also established a variation, from 6000 to 7050m, to the historic route first climbed in 1979 by the legendary British trio Peter Boardman, Joe Tasker and Doug Scott. We reported about this ascent a few days ago and announced Urubko's beautiful solitary summit. Needless to say, this is a great and important undertaking. But now that the first details and reports are beginning to be appear on the various climbers blogs, the ascent has all the makings of a great little story of mountaineering, worth recounting and remembering. Confirming once again that, all things said and done, the Himalaya and these great mountains continue to represent the unthinkable. But also how, at altitude, decisions can suddenly change (just like the weather). And how teamwork, when alpinists are alpinists, can be both important and great.

As mentioned, Urubko was the only member of the team to reach the summit and he did so by making a decision that was almost unexpected and certainly difficult. He jokes around, writes that he only ascended to"earn his lunch". In truth though the weather (despite the forecast) wasn't particularly favorable. What's more, the route was"very dangerous" according to Urubko. Climbing safely, roped as a team, would take too long. And so"with my heart in my mouth, swearing to myself that I wouldn't make a single mistake, I gave it a go." It's ten past five on 19 May, it's still dark outside when Urubko leaves Camp 4 at 7650m. Up to 8350m he can follow the trail broken the previous day by his teammates Bielicki, Sinev and Txikon... and then little more than 200 meters remain to reach the summit. What he knows is that it's going to be a race against time, against the wind... and that he cannot afford to make a mistake. But what had happened to his climbing partners the day before ?

As Alex Txikon recounts, it all began on Wednesday, May 14. Adam Bielecki, Dmitri Sinev and Txikon set off from Base Camp. The plan was simple: Urubko and Braun would set off a day later, after this leading trio.The aim was to meet up three days later (i.e. 17 May), all five at 7500m to then, the next day, attempt the summit. In the meantime Bielecki, Sinev and Txikon - the three musketeers as Urubko called them – would try to prepare the route to the shoulder and establish Camp 3 and then Camp 4 at 7500m. In the past the expedition had"only" reached an altitude of 7150m, establishing as it happens a variation to the original route past a very demanding section (with"18 pitches of difficult climbing"). But let's continue with our story...

On Wednesday, May 14 Bielecki, Sinev and Txikon sleep at Camp 1 at 6000m. It doesn't snow... perhaps the prediceted good weather window will show up after all. They'd certainly need it since the next day promises to be difficult: the three will have to breach the rock bastion to reach the Shoulder at 7500m and continue to the summit tower, traversing from north to south, something no one has ever done before. "It seems like a problem" writes Urubko from base camp while, together with his friend Artem Braun, he prepares to leave for the slopes above. As he himself writes, he is the only one who didn't plan to attempt the summit. Perhaps he thinks he's not sufficiently acclimatised.

Thursday, May 15th is a long day for the leading trio. "We've reached the North Col at 7050 metres," writes Txikon "So far everything has gone well and, all things considered, is under control. From now on we've reached the moment of truth." A moment that arrives the next day. They climb with heavy loads, aiming for the Shoulder at 7500 metres. The wind is extremely strong, the fight upwards even tougher... and so they decide to pitch a tent (Camp 3) at 7,250 meters. Bielecki and Txikon then continue upwards to prepare the route for the next morning. At first the Russian leads, then the Basque takes over to climb "a beautiful and exhausting 70m pitch past rock graded at least 6a." After having equipped 3 pitches it's time to return to the tent: they've been on the trot for more than 12 hours.

It's Saturday, May 17 and Bielecki, Sinev and Txikon have just one chance: they must reach the shoulder. This is by no means easy, but in the words of Txikon, at this altitude, what - if anything - is simple? Up there "Everything is terribly difficult." However, after another 12 hours of effort and massive exposure they reach 7600m and the 4th and final Camp. While they pitch the tent they suddenly hear a shout that Txikon describes as follows: "Joy! I hear Denis. Excellent! The plan has worked out perfectly, just as we'd agreed at Base Camp. Incredible! In a few hours we'll attempt the summit together." Urubko, who reached them from Camp 2 at 7250m with Braun, knows that everyone wants the summit tomorrow and writes "The weather is good. We will be careful. Best for all, Denis."

So along comes Sunday, 18 May. 28 days have passed since they first arrived at Base Camp and the time has now come for the push to the"cumbre". Almost a thousand difficult metres still separate them from the top and... there's no time to lose. At two twenty the first group sets off, at three they are joined by Urubko and Braun. They're at about 7850m and have to climb the section that, apart from offering black, extremely steep ice, is also "very, very dangerous. The slightest mistake and you'd fall 2,500 meters" explains Txikon.

At this point Urubko and Braun decide to turn back while "The Three Musketeers", Sinev, Bielecki and Txikon, continue upwards. They breach the most dangerous sections and then climb the steep (60-70°) couloir where they fix a rope. Another difficult pitch then leads to nigh vertical rock.""It seems as if the col can be reached from here by climbing past the gendarmes" writes Txikon. "Dima leads through the rocky section, then I take over and suddenly I stumble across a half-buried body. I've already done this before, but this time it's different. We're at circa 8000m, a shiver runs down my spine. Why all this? Might we endure the same fate? And for what reason? Are the bets we've hedged sufficiently risky to kill us? I turn away, grit my teeth and try to remain concentrated."

They continue... weighed down by the load, upwards, perhaps a little slow. At around 16:00 they're at almost 8500m and it's already... too late. Adam Bielecki is the one who realises this, and urges his teammates to turn around and descend. "I think Adam did the right thing and saved our lives" Txikon would later write. But it's not all over yet because his partners then save his life, for during the descent Bielecki slips. The others watch him slide away, they follow the tracks, but loose sight of him. Can't hear him. They think he's dead... Then the miracle: the Russian manages to stop after 100m, he himself doesn't know how, it's one of those once in a million things . The other two join him, give him a hand, but Bielecki is a tough nut to crack: he's fine. Now though they can't find the tent. They fear they won't be able to locate it and that would be a real disaster. But then they hear the voices of Urubko and Braun... At midnight the three musketeers are back in the tent, at 7250m, exhausted but safe. It'll be a difficult night, Txikon shows signs of frostbite to his big toe, but they're safe.

What prompted Denis Urubko, after that night, to go for his summit push perhaps he himself doesn't know. Alpinists are like that, perhaps they're "special" for this reason, too. The fact of the matter is that at ten past five on Monday, May 19 Urubko leaves the tent and at 9:40, after only four and a half hours, he reaches the summit of Kangchenjunga. "On the top you have to 'let go'. I spent half an hour on the highest point, remembering that I was here exactly 12 years ago... ". In the words of Txikon : "Incredibleeee! Denissss, super - Denis! Only very few people can achieve something like this!" For his part Denis - who descended from the summit at supersonic speed to reach the others when they were practically at Camp 1 at 6000m - explains his success as follows: "Alex (Txikon, ed) breached the most demanding section at 6100m. Adam (Bielecki ed) confronted the rib at 7500m. Artiom (Braun, ed) gave all at the col. For all this time Dmitry (Sinev ed) ensured logistics: gear, food, gas, communication between the groups. Thanks guys!" And perhaps we should say thank you, too: this seems to us like a great little story of sincere alpinism, shared together.