Cho Oyu and the south-east face. The red line marks the planned line of ascent which according to www.russianclimb.com was followed almost entirely by Urubko and Dedeshko.
Photo by arch. Urubko 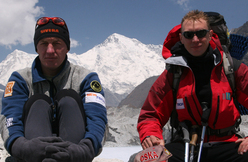 Denis Urubko, with his recent new route up the SE Face of Cho Oyu, has climbed all fourteen 8000m summits.

Denis Urubko has done it! On 11 May the Kazakh mountaineer reached the summit of Cho Oyu (8201m) and, in doing so, climbed all fourteen 8000m peaks (info russianclimb.com). As has become the norm, Urubko closed the circle in style by climbing this Himalayan giant via an audacious new route directly up the imposing southeast face.

Cho Oyu is Urubko's third new route on an 8000m peak, after Manaslu and Broad Peak, and comes in the wake of his K2 ascent via the Japanaese route up the difficult and remote north face, and the splendid historic first winter ascent of Makalu together with Simone Moro. It was this Italian mountaineer who "discovered" Urubko on Peak Lenin and enabled him to begin his beautiful collection of the highest mountains in the world. The ascent of Peak Lenin dates back to 2000 and during Urubko's first Himalayan experience he ascended the highest peak of all: Everest from the south. An ascent destined for a great future.

It's almost superfluous to underline that this exceptional Kazak military squad mountaineer, born in Russia on 29 July 1973, climbed all fourteen 8000m peaks without the use of supplementary oxygen. Furthermore, many ascents were climbed in two-man teams and "alpine style", a distinctive key to measuring great ascents in the Himalaya. This holds true for his new routes on Manaslu and Broad Peak, climbed with K2 north face companion Serguey Samoilov, as well as the winter ascent of Makalu with Simone Moro and this latest ascent of Cho Oyu with Borish Dedeshko.

Little is known as yet about the Cho Oyu climb, except that Urubko and Dedeshko departed from ABC on 7 May. Climbing alpine style the two were blocked by bad weather at 7600m for 15 hours and, after having reached the summit on 11 May, they needed another 3 days to descend via the line of ascent, two of which without food.

Denis Urubko is the 7th mountaineer - after Messner, Loretan, Oiarzabal, Iñurrategi, Viesturs and Mondinelli, to have climbed all fourteen 8000m peaks without supplementary oxygen. We're certain that after having reached this important goal the Kazakh climber will continue to go from strength to strength.