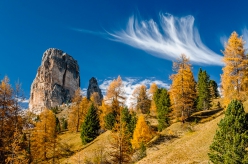 The Cinque Torri in the Dolomites
Photo by Roberto Casanova 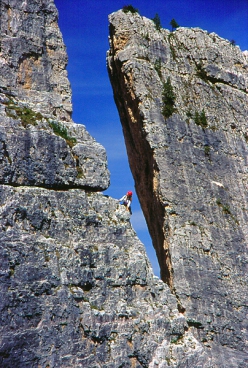 Rock climbing at the Cinque Torri in the Dolomites: Torre Lusy, via Lusy-Pompanin
Photo by Roberto Casanova 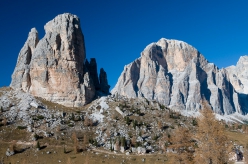 The Cinque Torri in the Dolomites, in the background Tofana di Rozes (3224 m)
Photo by Roberto Casanova

Cinque Torri: advice for climbing in the Dolomites haven

Six quick tips for rock climbing at the Cinque Torri from the Cortina Mountain Guides, prior to the upcoming meeting Delicious Climbing Dolomiti scheduled to takes place on Sunday 23 September 2018. By Paolino Tassi

The peculiarity of climbing at Cinque Torri lies in the fact that you’re up against walls that have come to symbolise the start of mountaineering int he Dolomites, it’s a testing ground that is never straightforward and never goes out of fashion. For this reason I asked some Mountain Guide colleagues which Cinque Torri rock climbs they would suggest.

Luca Dapoz (president of the Cortina Alpine Guides): "Undoubtedly Via Diretta, a sixth grade route, never obvious, with a small overhang close to the top, a test prior to moving on to more challenging climbs on larger rock faces."

Andrea Piccoliori: "Via Miriam! Logical and elegant, this requires knowing how to deal with rope manoeuvres, intuition and good climbing technique."

Enrico Maioni: "Torre Inglese, the English Tower, tall and slender, even if it’s only two pitches long it provides all the excitement of a big route. The starting corner, a bit greasy, is by no means trivial and then the final wall seems more difficult than it actually is."

Massimo Da Pozzo (legendary Dolomite climber): "Undoubtedly Via Raponzole, a climb I rebolted recently, little known, up superb rock, a first-class 6b with a fair bit of exposure."

- The competition is due to begin at 10 a.m. and will end at 3 p.m
- The meeting point for contestants is the Scoiattoli Refuge, starting from 9 a.m.
- The route list must be handed in at the same point by 3 p.m.

Registration
- The registration fee is 48 euros per pair and includes ascent and descent on the 5 Torri chairlift, competition pack, meal vouchers, assistance and refreshments at the site of the competition,and free gifts.
- Preregistration should be sent via email to: info@guidecortina.com

Notes
In case of rain the event will take place at the Lino Lacedelli climbing wall in Cortina
A maximum of 60 pairs - a total of 120 participants - will be accepted. The pairs must be formed of two participants only; absolutely no substitutions will be allowed during the competition. If the limit of 60 pairs is reached, the organizers will consider the possibility of creating a waiting list. The organizers will decide whether or not to accept further registrations on a "first come first served" basis.

17.09.2018
Cinque Torri, Dolomites climbing and the Delicious Climbing Dolomiti event by Paolino Tassi
Italian mountain guide Paolo Tassi invites everyone to take part on Sunday 23 September 2018 in the Delicious Climbing Dolomiti event at the world-famous Cinque Torri (Cortina): an unmissable opportunity to climb together and share the sense of climbing in a unique setting in the heart of the Dolomites.