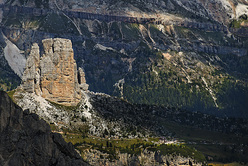 The magnificent Cinque Torri in the Dolomites.
Photo by Roberto Casanova

The sport climbs at Cinque Torri, the historic symbol of alpinism and rock climbing in Cortina and the Ampezzo valley.

Thanks to their infinite variety of shapes and sizes, the marvellous Cinque Torri ideally represent the entire Dolomites. Although the towers can be admired from the center of Cortina, don't be deceived by their unmistakable silhouette: the characteristic profile isn't comprised of just 5 towers, but by a mass of secondary boulders, fractured towers and peaks sprinkled liberally across the entire area. These peaks are located to the west of Cortina on a grassy hillock just above the tree line at circa 2200m. From a geological point of view they belong to the Monte Averau group and are structured as follows:

The Cinque Torri are, by definition, everyone's "gym": for alpinists and sport climbers, for beginners to experts alike. It is on this jewel, made up of the most diverse boulders and towers, that the alpine season is prepared, that the "engines are revved" before climbing the massive walls nearby, such as the Tofane and Lagazuoi. In summer the ropes of alpinists intertwine with those of sport climbers who converge here to escape the summer heat and to enjoy the unique surroundings.