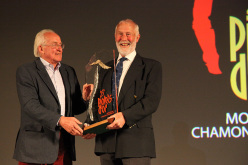 The docu-film Chris Bonington - Life and Climbs (2015, 22 minutes) is now online. Directed by Vinicio Stefanello for the Municipality of Courmayeur, in this film great British mountaineer tells his life story.

March 2015. We were all alone. A few snowflakes still swirled in the air. Only a flock of sheep broke the silence in that remote corner of the Lake District. We were there, immersed in that suspended and ice cold air, staring at Chris Bonington's house. Our appointment was at 8 in the morning, we were 5 minutes early and in slight trepidation about ringing the bell of one of the greatest mountaineers in the world. Perhaps even the most famous, along with Edmund Hillary and Reinhold Messner. Especially since none of us four had ever met him before. That hesitation lasted only an instant though. Then we rang that bell. It was he who opened the door. And he was precisely as I imagined him to be, with his groomed white beard and the look and bearing of a true Sir. And he lived up to his name. Kind and helpful, but also extremely professional. This is how we began making the following short docu-film for the Municipality of Courmayeur about the man and climber who at the Piolet d'Or 2015 would be awarded with the the Piolet d'Or for Lifetime Achievement (a recognition that only the world’s best have received).

I could tell you about his house. About his climbing memories, and all the material he still keeps about his great climbs I could tell you about the fascinating stories he told us. Or the walk after lunch across those barren, yet fascinating and wild, hills around his home. And also about the weather that changed every five minutes, from pale sunshine, to hail and snow and back again. And then there was that beer in his pub, and the dinner he offered us in the "best restaurant in the county". I could talk about his words of wisdom. But maybe you can gleam some of all this in the following short film that talks about the strength and knowledge of a man and a climber who chose to be precisely this.

Chris Bonington - Life and Climbs
(2015, 22  minutes)
Chris Bonington - one of the great mountaineers of the second half of the twentieth century - retraces the stories and adventures of a lifetime exploring and climbing the world’s mountains. “It feels like I’m still there…” explains Bonington, remembering those mountains and moments still so vivid and present in his mind. This is the starting point for a journey and a reflection that embraces the deepest, most noble but also contradictory sentiments of this mountaineer and man. His love for his wife and children, his decision to live for and from mountaineering, his friendships, the conquests but also the pain of the loss of so many friends become the story, touching and sincere, of a unique experience and research that never ends, just like all great passions.

05.08.2016
Sir Chris Bonington at Courmayeur's Passione Verticale 2016
On Sunday, August 7 the legendary British mountaineer Sir Chris Bonington will take to the stage at Passione Verticale, the classic summer festival the town of Courmayeur dedicates every year to alpinism and the mountains. The evening begins at 21:15 and will be hosted by Vinicio Stefanello of planetmountain.com.