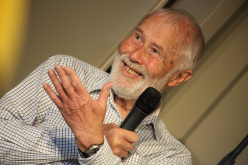 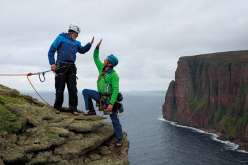 Sir Chris Bonington and Leo Houlding reach the summit of The Old Man of Hoy, Orkney Islands
Photo by Berghaus 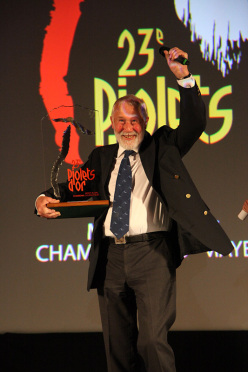 On Sunday, August 7 the legendary British mountaineer Sir Chris Bonington will take to the stage at Passione Verticale, the classic summer festival the town of Courmayeur dedicates every year to alpinism and the mountains. The evening begins at 21:15 and will be hosted by Vinicio Stefanello of planetmountain.com.

This evening Chris Bonington, mountaineering’s only Sir, is the star guest at Courmayeur’s second appointment "I Volti”, the faces of alpinism that feature in its series Vertical Passion. It goes without saying that it is a unique opportunity to get to know the mountain climber and man who made climbing and mountaineering his life. Born in Hampstead (London), aged 16 he discovered his innate love for adventure. Since then he has never stopped. His is an intense and adventurous journey that has explored the world’s greatest mountains. A journey that continues even to this day. Because this boy, born back in 1934, has never stopped taking to the mountains and being an alpinist.

List all the stages, ascents, adventures and explorations of Chris Bonington is almost impossible. It all began though in his early youth on Britain’s rock faces. And continued with a great season in the Alps that included,, among others, the first ascent of the Central Pillar of Frêney and Aiguille des Drus in the Mont Blanc massif, as well as the first British ascent of the North Face of the Eiger. His first steps in the Himalaya in 1960 resulted in an era defining first ascent of Annapurna II, along the magnificent ridgeline at an altitude of 8,000 meters. A year later this was immediately followed by the amazing first ascent of the South Face of Nuptse, the difficult and beautiful peak that forms part of the stellar trio that includes gigantic Everest and Lhotse. While in 1962 he teamed up Don Willans to make the first ascent of the Central Tower of Paine in Patagonia.

It was in the Himalayas that, as expedition leader and organiser, he scored two of the most important achievements of all time. In 1970 he was instrumental in the success of the first ascent of the immense south face of Annapurna, the first major Himalayan face to be breached. And then, in 1975, he achieved what the best Himalayan mountaineers had only dreamt of: the first ascent of the South-West Face of Everest. It must be said that Bonington never led his expeditions from base camp only, and also that he was in charge of an exceptional set of climbers, such as Don Whillans, Dougal Haston, Doug Scott and Peter Boardman, to mention only those who reached the summit. This was no easy task and even in this Bonington stood out. It shouldn't be forgotten that in the meantime Bonington also made some of the most memorable and epic ascents of some of the most beautiful and difficult Himalayan seventhousanders. The first ascent of Changabang came about in 1974. The ascent of Ogre dates back to 1975 (together with Doug Scott) along with that incredible and dramatic descent. In 1981 he completed the first ascent of Kongur Tagh (7.719m) in China with Peter Boardman, Allan Rouse and Joe Tasker. And then, in 1983, he and Jim Fotheringham made a beautiful alpine style first ascent of the magnificent SW spur of Shivling in India’s Garwal Himalaya.

Then, in 1985, aged 50, he reached the top of Mt. Everest: at the time he was the oldest climber to summit the highest mountain. But more was to come, with the first ascent of Menlungtse (7181m) in 1988, Rangrik-Rang (6553m) in 1994, Drangnag-Ri (6801m) in 1995. And then, just to prove that he never stopped climbing, in 2014 he and Leo Houlding repeated the Old Man of Hoy, the route that has come to symbolize British rock climbing, first ascended together with Tom Patey in 1966 above the sea that washes around the Orkney Islands. Of course, the adventure’s of Bonington were marked not only by success but also by failed attempts and by absolute tragedies. The deaths of some of his closest climbing partners, such as Nick Estcourt, Mick Burke, Pete Boardman, Joe Tasker and Dougal Haston left a profound mark. It is for this reason, because of this extraordinary experience throughout his beautiful and difficult life, that Bonington has much to tell and teach us. It is no coincidence that Queen Elizabeth awarded him a Knighthood in 1996 (he is the only Sir of British mountaineering) and it comes as no surprise that in 2015, in Courmayeur, Bonington was awarded the Piolet d'Or Carriere, the lifetime’s achievement award only given to the greatest mountaineers in the world.