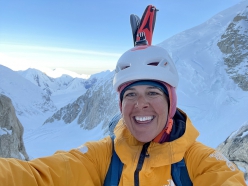 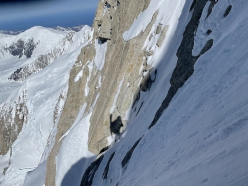 Top American alpinist Chantel Astorga has made a solo ascent of the Cassin Ridge on Denali in Alaska.

American alpinist Chantel Astorga has made a remarkable solo ascent of the Cassin Ridge on Denali in Alaska, at 6194 meters the highest mountain in North America. Following the legendary line first climbed in 1961 by an Italian Ragni di Lecco expedition led by Riccardo Cassin, Astorga climbed the mountain in an extremely impressive time of just 14 hours and 39 minutes to reach the summit at 20:00 on 14 June before descending the standard West Buttress route.

Making the most of favourable conditions, Astorga had approached the Ridge by skiing down the West Rib/Seattle Ramp. On her return she commented "Earlier this week my longtime vision and dream became a reality."

Astorga has carried out numerous impressive ascents of Denali in the past, notably in 2015 when with she teamed up with Jewel Lund to make the first female ascent of the Denali Diamond Headwall. In 2018 she topped this when with Anne Gilbert Chase she completed the first all-female ascent, and only ninth overall, of the Slovak Direct. More information will follow in due course.


CASSIN RIDGE, DENALI
First ascended from 6 - 19 July 1961 by the Italian Ragni di Lecco members Luigino Airoldi, Gigi Alippi, Jack Canali, Riccardo Cassin, Romano Perego and Annibale Zucchi, the elegant and challenging line is one of the most famous and sought-after alpine routes in the world. After the ascent Cassin was congratulated via telegram by the President of the United States of America, John Kennedy. The route is graded Alaska Grade 5, 65°, 5.8 AI4, 9,000 feet and usually takes anywhere between 3 - 7 days.