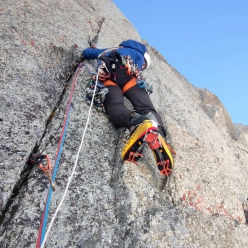 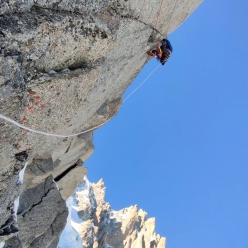 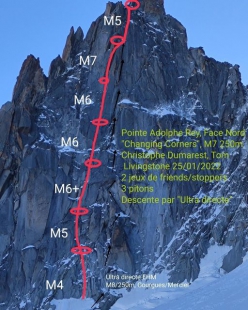 Alpinists Christophe Dumarest and Tom Livingstone have made the first ascent of Changing Corners (M7, 250m) on Pointe Adolphe Rey in the Mont Blanc massif.

On 25 January 2022 French mountain guide Christophe Dumarest and British alpinist Tom Livingstone established Changing Corners up the North Face of Pointe Adolphe Rey, next to Grand Capucin in the Mont Blanc massif. The 250m line checks in with difficulties up to M7 and was climbed free by the two mountaineers in a single day from Chamonix.

Dumarest wrote: "I've always wanted to open a new route on this face… I had spotted the line a long time ago, and waited patiently for a climbing partner and the right conditions to make an attempt. I’d noticed a thin crack on a large slab, capped by a fantastic corner near the top, and I guessed that it was possible to climb this route with crampons & ice axes in winter.

On Monday 24 January I climbed Goulotte Lafaille with a client. When I suggested to Tom Livingstone to open this route with me the next day he replied: "yes of course”. After our ascent of "No Siesta” on the Grandes Jorasses a few days earlier, I knew that Tom was the man for this project. So I stashed all the gear in a crevasse…

On Tuesday we reached the base of the mountain, ready for a great fight. It was so exciting to lock blades in these thin cracks, knowing we were the first, imagining that maybe someday others might follow our tracks…

It was late in the afternoon when we reached the base of a beautiful corner, it was my turn to take the lead. What followed was a small "war of attrition" on this aesthetic 40m corner close to the summit top. For what felt like hours I battled hard against falling out of this "open book", a bit like a swimmer trying to keep his head above the water. It was a "true moment" of determination to climb this pitch free! This was then followed by a section that although not too extreme, provided challenging footwork. Above all, it was extremely beautiful. Hence the name of the route, Changing Corners!

We chose to climb the route when it was without ice, with the driest conditions possible, and hope though that those who repeat it will have more ice."

20.04.2018
Alaska: new British route on Mt. Jezebel by Tom Livingstone and Uisdean Hawthorn
British mountaineers Tom Livingstone and Uisdean Hawthorn have made the first ascent of Fun or Fear, a new climb up the East face of Mt. Jezebel in the Revelations range of Alaska. Climbed alpine style over two days, the route breaches difficulties up to M6+, 90 deg neve, Ai6 R.
01.04.2005
Grandes Jorasses: new route by Gabarrou, Batoux and Dumarest
From 17 to 21 March Patrick Gabarrou, Philippe Batoux and Christophe Dumarest made the first ascent of a new route on the North Face of Punta Margherita (4066m) at the Grandes Jorasses, Mont Blanc.