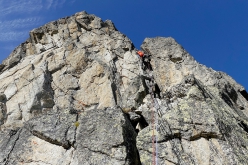 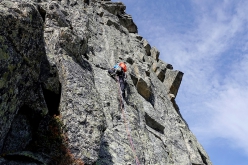 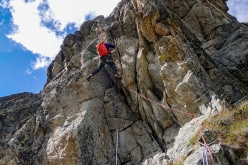 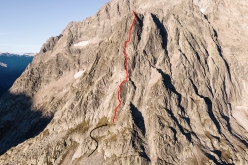 The brief climbing history to Mont Vert de Greuvetta in the Mont Blanc massif, summarised by Simon Richardson who, this autumn with Michael Rinn, climbed a series of new routes in the range.

The fine-grained granite walls of Mont Vert de Greuvetta (2810m) situated on the Italian side of the Mont Blanc Range are attracting an increasing number of climbers. The mountain lies directly above the Comino bivouac hut which is about two hours walk from the end of the road in Val Ferret. It lies at the eastern end of the long south-east ridge of Mont Rouge de Greuvetta (3480m), a sub summit of Mont Greuvetta (3684m). The peak was first climbed by Richard Goedeke and Till Bartels in July 1975 via the 300m-high South Ridge (D+) - a lovely route on excellent rock. Goedeke and Bartels extended their adventure by continuing along the crest heading north-west from the summit over P2825, P2873 and P2936 before down climbing a gully to gain the lower reaches of the Greuvetta glacier. Their route was repeated a few weeks later by H.Langowski who descended east from the first summit to gain the moraines above Triolet glacier.

The mountain lay forgotten until 2002 when Franchini and Zizioli climbed the impressive vertical diedre on the SE Face. Their 300m-high route is the most difficult route climbed to date on the mountain but the 7a+, A0, 6b obl rating put off most suitors. Eight years later, Lorenzini Carlo, Carletto Vito and Pasero Alberto added a bolt-protected line up walls and steep slabs right of the South Ridge. The 475m-long Via del Carletto (6b, 6a obl) is the most popular route on the mountain and has seen approximately 20 ascents. The double belay bolts offer the easiest descent from the summit, although they can be difficult to find from above. The first anchor is 40m along the sharp ridge extending south-west from the summit.

In 2013, Tom Prentice and Simon Richardson climbed the SW Spur of P2873 (D+) and the difficult SW Ridge (TD) of P2810. Two years later, Richardson completed a triptych of routes on the west face of the massif by climbing the SW Face of P2825 (D) with Roger Webb. The SW Spur of P2873 was repeated by François Damilano in 2021 and the SW ridge was climbed in 2019 by Olga Gorodetskaya and Maxim Foygel. It has seen a couple of ascents since.

Climbing activity picked up in 2020. The most notable event was the equipping of the Franchini-Zizoli route by GianPaolo Ducly, Mario Oglingo and Rocco Perronne in August. The route, now named Gran Diedro Sud, has five difficult pitches with the main corner providing two excellent ropelengths of 6c+ and 6c. The lower slabs are well protected by bolts but a double set of cams are required for the diedre. The following month, Simon Richardson and Micha Rinn climbed Dinosaur Gully (M3/M4), the prominent line of weakness to the left of the SW Ridge leading to the small sub summit between P2825m and P2810m. The gully was climbed Scottish winter style in very cold autumn conditions using frozen turf, thin ice, unconsolidated snow and snowed up rock. The route was very transitory however and the ice melted within hours of the ascent. Two days later the pair climbed Autumn Vibes (5b), the grooves and ramps right of Via del Carletto, finishing direct up the front face of the summit tower right of the prominent gully that cleaves the upper face.

This autumn, François Damilano and Ulysse Lefebvre repeated Gan Diedro Sud confirming its quality as well as the requirement to carry lots of cams! Micha Rinn and Simon Richardson returned to the area in late September and made several exploratory ascents. Their finest addition was Bella Vista (6b+) which follows the east ridge of the peak starting up the prominent pillar situated directly above the Comino Hut. The crux was the second pitch on the pillar, an overhanging chimney and crack that succumbed to a forceful lead by Rinn. Above, cracks, chimneys and a superb 5c crack led up and right of the final pitches of Gran Diedro Sud. The rock quality throughout is superb and in the upper half there are outstanding views into the Triolet Basin.

The same pair also found what is probably the easiest route up Mont Vert de Greuvetta. Way of the Ibex (AD) bypasses the initial pillar of Bella Vista on the left and then takes easy grooves and ramps on the NE Face. The route had possibly been climbed before, and the upper half probably corresponds to Langowski’s descent way back in 1975. Whether it has seen a human ascent before or not, the route is frequently climbed by ibex. Richardson recalls that on the ascent of the SW Ridge in 2013 they were greeted by the same ibex at the foot of the climb and on the summit! Rinn and Richardson concluded an enjoyable few days by climbing South Face Route (AD), a mountaineering line on P2936. This may have been the first time this remote summit had been visited since Goedeke and Bartels passed this way in July 1975.