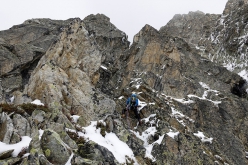 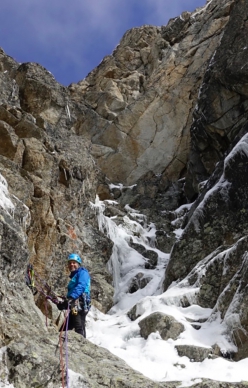 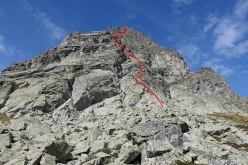 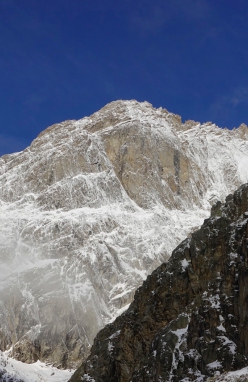 After four months of being limited to only 8km travel from my home in Scotland due to COVID restrictions, I was keen to do some alpine climbing with Michael Rinn in September. Unfortunately our chosen dates at the end of the month coincided with the onset of the first autumn storms.

With the snow line down to 1000m the high mountains were out of the question but the unseasonally low temperatures pointed to a unique opportunity. How about pretending that we were in Scotland and climbing a Scottish-style mixed route on frozen turf and snowed up rock?

I knew of an unclimbed gully line on the south west side of Mont Vert de Greuvetta on the Italian side of the Mont Blanc Range so we headed up to the Comino Hut. Progress was slow with metre-high drifts starting just above the road and it snowed throughout most of the approach. But this was exactly what we needed - the low temperatures were freezing the turf and the rock was frosting white with rime and fresh powder snow.

We were away before dawn next morning (September 28) and reached the bottom of the route as the sun rose into a milky sky from behind the Grand Combin. Our tactics had worked - a frozen ramp led into the gully that we climbed in eight long pitches on a mixture of thin new ice, frozen turf and deep bottomless snow. We exited onto the broad summit ridge at a small subsidiary summit between P2825 and P2810m.

It was 3pm so we decided to abseil the line of ascent. As we dropped height we were astonished to find that ice pitches we had climbed in the morning had turned into waterfalls. Dinosaur Gully (300m M3/4 Scottish IV) was so fleeting and transitory that it had only existed for a handful of hours.

Two days later (September 30) the sun had done its work and transformed the south face of Mont Vert de Greuvetta back into a rock climbing playground. We couldn’t resist travelling more new ground in the September sunshine and found Autumn Vibes (300m Difficile 5b) a lovely 10-pitch trad line up grooves and ramps right of Via Carletto.

A day later Storm Alex wreaked havoc across the region with floods, high winds and more deep snow. Our short alpine autumn interlude was over.

This was not my first visit to the area. In fact, I have visited the south side of the Greuvetta massif several times and very much enjoy the beauty and remoteness of the place. In ten visits I have never met another climber.

The magnificent East Face of Mont Greuvetta was the initial attraction and in July 1994 Chris Cartwright and I made an early repeat of Il Pilastro del Sorriso (TD+ Ferrero-Manera 1982). The original route used a little aid and we may have made the first free ascent.

Other repeat ascents include the Grassi-Lang-Meneghin (D+ 1982) on the East Face of Petit Mont Greuvetta and Via Carletto (6b) on the South Face of Mont Vert de Greuvetta. Both of these routes were climbed with Tom Prentice.

Tom and I were attracted by the unclimbed pillar on the east facing wall between Petit Mont Greuvetta and the main summit. The pillar is remote and difficult to access but in 2013 we made the first ascent of Casa Dei Gracchi (TD+) which takes the corner line left of the pillar. Unsatisfied that we had not completed the project, we returned and climbed the crest of the pillar itself the following year. Il Pilastro Solitario (TD+) was a magnificent climb and the most fulfilling climb I have done in the area.

Regarding this year’s routes, Dinosaur Gully is very ephemeral and unlikely to see many repeats. By contrast, Autumn Vibes was a surprisingly good route at a modest standard, and very enjoyable in the autumn sunshine!