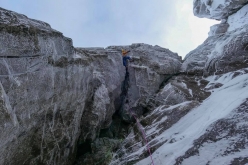 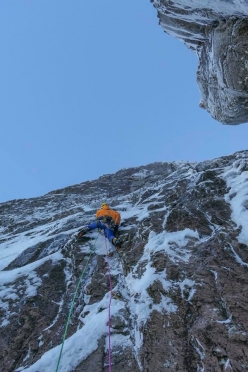 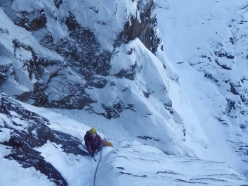 Boswell and Robertson discover their Holy Grail in Scottish Highlands

Greg Boswell and Guy Robertson have climbed a significant new route on Buachaille in Scotland called The Holy Grail IX/10.

After producing one of Scotland’s most difficult mixed routes close to Glen Coe in mid-December, ace Scottish mountaineers Greg Boswell and Guy Robertson have now returned to the same Highlands area to add a difficult new outing on Buachaille’s Slime Wall.

Robertson had previously climbed almost all routes on the Slime Wall, both summer and winter, and on 11 January he and Boswell climbed the first two pitches of Ravens Gully before exploring a new direct line straight up the face and through the obvious jutting roof.

The route was split into 6 pitches and while the climbing up to the cave has been described as “brilliant, it was steep, hard enough to keep us on our toes and well protected”, unravelling a way through the menacing overhang proved in a different league. Robertson took one fall on this fifth pitch, lowered back down to Boswell and then climbed to the next stance, with Boswell then finishing the route in the best of Scottish tradition in the dark.

The new route has been called The Holy Grail. With its IX/10 grade it is just notch easier than Lost Arrow Winter Variation but according to Boswell it offers “some of the best pitches of climbing” he has ever done.

Scotland delivers once again. This time at Slime Wall on the Buachaille. This was my maiden voyage up the wall, and it didn’t disappoint. We did a direct winter line straight up the face and through the great roof. What a day! Here’s a vid of the roof above us and Guy seconding up to the belay at the end of the 4th pitch. . . . . . #scotwinter #wearerab #suuntoclimb #mountains #buachaille #glencoe #view #climbing_videos_of_instagram #hard #roof #winter #funtimes #goodweather . . . . . . . . @rab.equipment @scarpa_uk @grivel @lekiuk @deuter @suunto