Guy Robertson on pitch 1 during the first ascent of The Greatest Show On Earth, X/10, climbed together with Greg Boswell at Coira Gorm, Cul Mor, Scotland
Photo by Greg Boswell, Guy Robertson 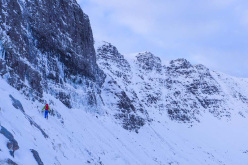 On 19 January 2014 Greg Boswell and Guy Robertson made the first ascent, onsight, of The Greatest Show On Earth, a six pitch outing on Cul Mor in Scotland. If the grade is confirmed, this is quite possibly the first onsight ascent of a grade X/10 winter climb in Britain.

Early on Monday morning Boswell and Robertson approached the Coire Gorm wall on Cul Mor, a circa 120m high, virgin face with no previously established routes on it, neither in summer nor in winter. It seemed in perfect conditions - read a "wave of hanging icicles and smooth fat columns" that led to a roof that stretched along the entire length of the buttress.

Boswell and Robertson quickly identified an obvious line through the roof that would lead to an "immaculate looking hanging turfy corner in the upper wall above" and Robertson led the first pitch to the get established below the overhang. Boswell took over and led the crux pitch, past extremely dubious gear and "some of the boldest and most technically difficult moves on marginal placements" he had ever done, adding "By now I was well up above the belay and with very little, and all of which being marginal, gear stopping me from zooming past the belay and onto the huge ledge below. Despite this, once I was fully committed and beyond the point of no return, the big fall and dodgy gear left my thoughts completely, I was well and truly focused on the climbing at hand, that was the only way I’d prevent myself from testing Guy’s first aid skills!"

A further four pitches of easier, but by no means easy, climbing led to the summit and these have been described by Robertson as follows: "A beautiful, natural winter line of dripping turf and ice unfolded above us, welcoming us steeply and directly, yet warmly straight into the heart of this vast blank canvas. Rarely had I savoured new-routing as much as this; although by no means easy, experience made it clear that our fate was now sealed, and with time to spare we could strap in and enjoy the ride. After three pitches of ‘desert island’ grade 6 mixed we were coiling the ropes as the sun’s smouldering embers died out."

Writing to planetmountain.com about the ascent, Boswell explained: "I have climbed a lot of the hardest routes in Scotland and many of them onsight, I have also put up many first ascents in the IX/9 and IX/10 region, but this new route definitely felt like it was a step further. I really felt like if I was to give a route grade X or higher it would definitely have to feel considerably harder than other things I've graded in the past. I didn't want to start over grading things just because I found them a little tricky, or that I wasn't really fit enough for them, so I'm glad that this new route was easily recognisable to me as a step up. I think it could be too easy for the grades to loose their way if people started to give high numbers just because it's a touch harder than the last route they did when the grading spectrum is so varied and big."

Boswell put the climb further into context: "Examples of other routes?... It's hard to say, as I've done a fair bit more climbing since I've done these and I'm much fitter now than I was then, but it felt harder and more serious than Don't Die of Ignorance on Ben Nevis, physically well more strenuous than The Hurting in the Cairngorms and a fair step up from things like Siberian Tiger and Culloden. So for the onsight, the grade of X/10 definitely fit! I thought the crux moves on the route the Cathedral on the Cobler graded tech 11 were harder, but I didn't onsight this. Basically, I've put a lot of time and effort into training and gathering route and grade experience to finally feel satisfied to know when something was worthy of me giving it the grade X without any second thoughts."