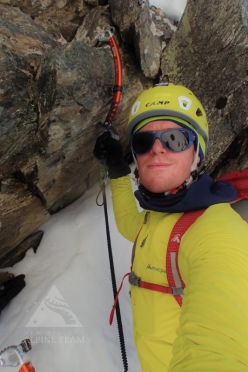 Ben Dare at the start of his new climb on Mt Percy Smith, New Zealand
Photo by Ben Dare

The SW Face of Mt Percy Smith in New Zealand and the climb The Promise, first ascended solo by Ben Dare on 07/10/2018
Photo by Simon Middlemass 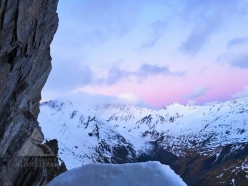 Sunset vista over a cloud enshrouded Mt Hopkins from a bivy site below the Mt Williams - Percy Smith col.
Photo by Ben Dare 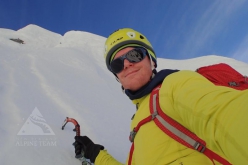 On 7 October 2018 Ben Dare made a solo first ascent of ‘The Promise’, a new mixed climb up the 700m high SW Face of Mt Percy Smith, New Zealand.

At the start of October Ben Dare has climbed what is only the second route up the Southwest Face of Mt Percy Smith, a "reclusive and obscure" mountain close to Aoraki / Mt Cook on the south island of New Zealand. Called The Promise, the new route tackles a 700m line to the right of the rock route On the Dark Shore established in the summer of 1993 by Bill McLeod and Peter Dickson.

After a bivy at the base, Dare initially negotiated "rock that lives up to all expectations, and not in a good way" before climbing a leftwards trending mixed line. He explained "As the terrain steepened the quality of the ice degraded. Slowly broken down by the recent warm temperatures, it clung defiantly to the rock beneath. Tentatively adhered with the last grasp of a dying winter. Pushed right by the leaning strata, haphazardly stacked layers of weathered and friable Greywacke, I aimed for a solitary gendarme silhouetted on the skyline. A final sentinel that stood guard - keeping a lonely vigil over the sweep of the face below. Caring not but for the passing of the seasons and time. Silently watching over those few who venture into its shadows to unlock the secrets held within."

Although climbed in early October and technically therefore in mid-spring in the austral hemisphere, the ascent is noteworthy because it is the first time the face has been climbed in winter conditions. In November 2017 Dare made the solo first ascent of Remembrance, a 550m climb up the South Face of Aoraki / Mt Cook.

11.09.2018
New Zealand: another mixed climb up Aoraki / Mount Cook
Mountaineers Caleb Jennings and Kim Ladiges have made the first ascent of Pilgrim, a new mixed climb up the south face of Aoraki / Mt Cook (3,764 m) in New Zealand.