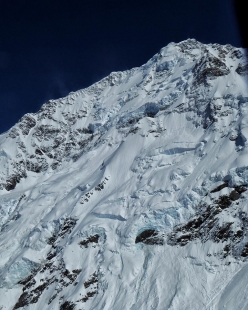 The fearsome Caroline Face on Mount Aoraki / Mount Cook (3724 m) in New Zealand, first skied on 27/10/2017 by Italian extreme skier Enrico Mosetti and Britain's Ben Briggs and Tom Grant. The first ascent of the face was carried out by John Glasgow and Peter Gough in November 1970
Photo by Enrico Mosetti

On 27 October the Italian mountaineer Enrico Mosetti and the Britons Ben Briggs and Tom Grant made the first ski descent of the Caroline Face, the difficult and dangerous SE Face of Mount Aoraki / Mount Cook (3724m) in New Zealand. The achievement has already been described by the local media as "historic".

An outrageous first ski descent, almost 2000 vertical meters along the fall line down the dreaded Caroline Face on Mount Aoraki, the highest mountain in New Zealand more commonly referred to as Mount Cook. This is the news that has just trickled though from the other side of the world, more precisely from the Southern Alps on the country’s South Island, where on 27 October Italy’s Enrico Mosetti and Britain’s Ben Briggs and Tom Grant carried out the first ski descent of the fearsome SE Face in what has been described by the local media as an "absolutely historic" undetaking.

On 27 October the three mountaineers started off by ascending the East Ridge. According to Mosetti, who spoke briefly to planetmountain.com, the ascent was "a beautiful climb, through very deep snow… really tiring." After ascending for seven and a half hours the trio reached the Porter Col from where they dropped down into the Caroline Face. At this point Briggs, Grant and Mosetti experienced what the Italian has described as "The biggest thing I've ever skied, the biggest line I could imagine to ski, and in great powder conditions!"

During the next hour and a half of extreme skiing the three managed to identify a line past the enormous, unstable seracs that characterise the SE Face. Only three rappels were needed and, incredibly, the descent took place in almost perfect snow conditions.

Circa 1800 meters high, the Caroline Face is the most dangerous and difficult face on Mount Aoraki and consequently the last one to have been ascended, on 6 and 7 November 1970 by John Glasgow and Peter Gough after a failed attempt in 1969.

In recent years the face has become a coveted target for steep skiing. In November 2013 Sweden’s Magnus Kastengren lost his life while preparing for the first ski descent with his skiing partner Andreas Fransson. Fransson lost his life in an avalanche in Chile in September 2014 along with Canada’s JP Auclair.

Mosetti has carried out a series of spectacular ski descents in the past. These include two iconic steep ski objectives in Peru, namely the SE Face of Aresonraju (6025 m) and the West Face of Tocllaraju (6034 m) skied solo in 2015, and the NNE Face of Monte Forato skied in 2011 with Marco Milanese and Andrea Fusari.

Details of the recent descent will probably not be known before the European’s return in mid-November. This is partly due to the poor wifi connection in the Mount Cook National Park and partly due to the fact that, as Mosetti told planetmountain.com yesterday, "we should be heading back into the mountains shortly."

22.04.2013
Monte Forato, NNE Face ski descent in Julian Alps
Using the recent first repeat of the NNE Face of Monte Forato, here is the first descent story by Slovenia's Marko Kern, followed by a report by Marco Milanese, his descent carried out on 7 April together with Enrico Mosetti and Andrea Fusari. Until 2011, this face was regarded as "the last great problem in the Julian Alps."