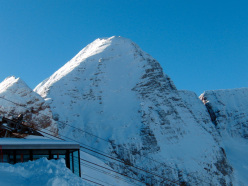 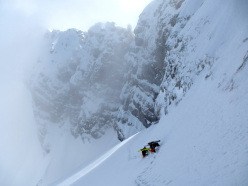 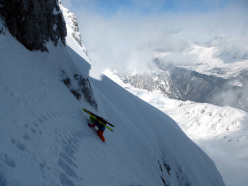 On the traverse
Photo by Marco Milanesi

Using the recent first repeat of the NNE Face of Monte Forato, here is the first descent story by Slovenia's Marko Kern, followed by a report by Marco Milanese, his descent carried out on 7 April together with Enrico Mosetti and Andrea Fusari. Until 2011, this face was regarded as "the last great problem in the Julian Alps."

MONTE FORATO by Marko Kern
The descent on the NE face of Monte Forato was the apex of my 2011 ski season. I'd been waiting for this descent since the beginning of February, ever since I first saw this beautiful, wide white line which works its way down from the top of Jof Fuart: a steep slope, wide and open - this is what I enjoy best in extreme skiing. The slope was indeed so steep and exposed that during my first attempt (the very next day after I first saw it) I was not sure if I'd ever be capable of skiing it. All throughout spring I waited for the right moment and in the end I nearly missed it. On the first of May the short crux section that leads to the slope was poorly covered with unsettled spring snow, while on the upper slope there were two short sections of heavy, wet snow where we sank in to the waist. Conditions were really not very good and during the ascent we opted for the normal descent. But as I started skiing from the summit I suddenly changed my mind. I turned left and after the first turn on the NE face I was completely in focus and I skied the slope in one single go. I finally caught some breath just above the lower passage and when I set off and skied the traverse to the gully the snow tumbled off behind me. The end of the route was a relief and I was overcome with immense delight.

THE FORBIDDEN FRUIT
by Marco "Rasta" Milanese
While on my way home after a hard day's work with Andrea I decide to call Enrico and suggest the Forato face, knowing full-well that he'd say yes. The trio was ready, excellent. I hadn't been seriously worried about a climb or descent for a long time and although I enjoy doing all sorts of things, extreme skiing is somewhat different from all the rest, you don't have a rope and you simply cannot make any mistakes... An excellent ascent beneath darting clouds and Patagonian winds brought us to the summit. A loose binding added a hint of spice and I fixed it before joining the others at the start of what seemed like the main difficulties. In complete whiteout conditions the snow blended into the milkwhite foreground creating a vortex effect, the steepness invited us in, lured us to its snowy, foggy bite, called us sweetly. I clearly remember my breathing, controlled, regular, a metronome poised above the void. One small step after the next we descended, jumping and breathing till our lungs burst. We'd done it, the steepest section was now behind us, we'd escaped our destiny, I breathed life once more. It had been an awesome journey.