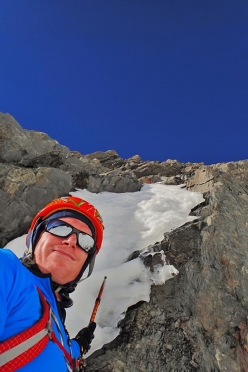 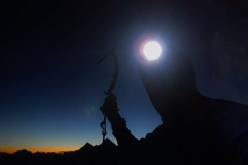 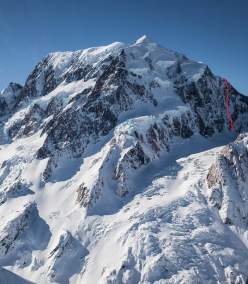 The South face of Aoraki / Mt Cook and the line of Remembrance, first ascended solo on 18/11/2017 by Ben Dare
Photo by Colin Monteath

On 18 November 2017 Ben Dare from New Zealand made the first ascent, solo, of Remembrance, a new 550 m climb up the South Face of Aoraki / Mt Cook.

Less than a month after the historic first ski descent of the SE Face of Mount Cook, better still, of Aoraki as it is referred to by the indigenous Maori people, a new route has now been forged up the same mountain. The new climb was added to the South Face on 18 November by Ben Dare.

After negotiating the perilous Noeline glacier, Dare breached the Bergshrund and climbed a line of ice all the way to rocky mixed ground below the south ridge. On reaching the crest Dare did not continue to the summit but instead descended off the South Ridge. The new route has been called Remembrance and is dedicated to Conor Smith who perished while climbing together with Sarwan Chand in April 2017. Dare had attempted the line with Smith a year ago.

Dare’s new route on Aoraki comes in the wake of another solo first ascent, namely the South Face of Peak 2472m, a mountain tucked beneath the West Shoulder of the more famous
Mt Huxley. Phoenix was ascended on 28 October 2017, tackles difficulties up to Grade 5+ (M4, AI4) in its 500m and breaches the “striking south face” by following the “obvious and alluring corner system that leads up through the full height of the face.”