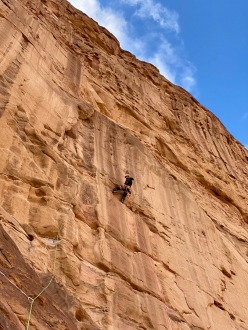 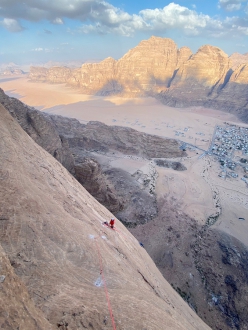 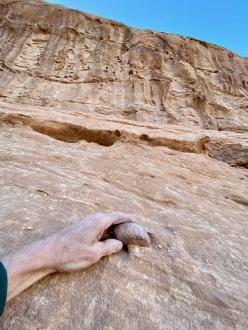 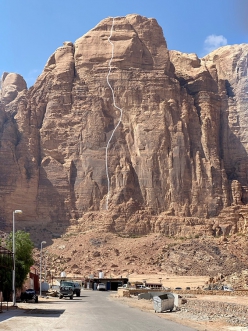 Much like on Tsaranoro Atsimo in Madagascar in 2018, the 49-year-old mountain guide and Jonathan Crison accompanied a young French Federation of Mountaineering and Climbing team comprised of Eline Le Menestrel, Solène Amoros, Eloi Peretti, Romaric Geffroy, Guillaume Colin and Thoma Meignan as they established la Voie du Coeur, the heart route directly up the East Face of Jebel Rum. This 430m line is fully bolted and breaches difficulties up to 7c+ max (7b obligatory). The route takes an independent line to the right of Revienta o barilla and crosses Insh’Allah Factor at about half-height.

Petit stated "The bottom pitches are exceptional up steep slabs and vertical walls. These are followed by slightly sandy and physical sections, then two pitches past delicate but well-protected rock before reaching the headwall and its compact layer of white sandstone, its small 7b/b + bombé overlap and its surreal balancy moves on small pebbles embedded in the rock."

09.05.2014
The Valley of the Moon: climbing in Jordan's Wadi Rum
After a first trip in 2013, Marcello Sanguineti recounts his intense 5-day climbing trip to Wadi Rum in Jordan, this time together with Manrico Dell'Agnola.

20.09.2011
Arnaud Petit spills the beans about Black Bean, Ceuse
Interview with French climber Arnaud Petit after his trad ascent of Black Bean 8b at, Ceuse, France.