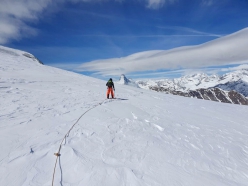 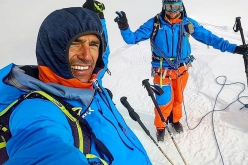 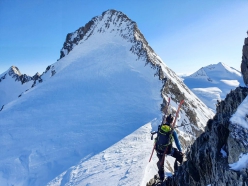 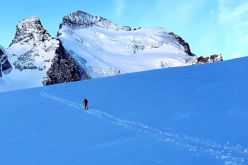 Italian mountaineers Nicola Castagna and Gabriel Perenzoni are currently climbing all 82 peaks over 4,000m in the Alps. Having set off on 4 May 2021, the two aspirant mountain guides have already climbed 30 mountains as part of their project called Altavia 4000.

The two aspirant mountain guides Nicola Castagna and Gabriel Perenzoni started without much ado but, in truth, they’re going full steam ahead with their ambitious goal of climbing all 82 peaks over 4000 meters in the Alps in this long season from May to July. The two set off on 4 May and initially completed some "great ski mountaineering tours up at altitude", bagging 30 fourthousanders before taking a week off. This break wasn’t because they needed to rest, but because conditions up in the mountains were poor and the snowpack needed some time to settle.

37-year-old Perenzoni and 26-year-old Castagna have called their project Altavia 4000. Although precursors spring to mind such as Miha Valic (2007), Franco Nicolini and Diego Giovannini (2008), Ueli Steck (2015) and Liv Sansoz (2018), the two are certainly not out there to set some sort of a record. As they told planetmountain.com "our idea is to climb all 82 x 4000 of the Alps by climbing the most interesting and classic ski mountaineering routes, and along the most beautiful ridges up these giants. All the routes we’ve chose share a common thread: elegance and essentiality." The pair can choose their climbs carefully as, unlike Nicolini, Giovannini and Steck, they are travelling to the mountains by car and therefore don’t need to make a logical enchainment but, instead, can choose which particular mountain seems to be in the best condition at any given moment.

Castagna and Perenzoni met at the mountain guide course and this project is the first real test together. "Climbing together on one day, then returning to the valley for a beer is great fun of course, but we’re slowly realising how completely different it is to climb for 30, 60, maybe 70 days on the trot. We sleep together, eat together, climb together... it’s very exciting!” confided Perenzoni.

The first 30 peaks were climbed in 21 days, during which they covered 40,000 meters in altitude a travelled a total of 403 km. “At the moment we’re on great form" explained Perenzoni "we keep getting faster and stronger, we’re really happy and also pleasantly surprised. Let’s hope it lasts!"

After ascending the first 30 peaks the pair concluded the ski mountaineering stage and are now in the Swiss Alps. "In the upcoming weeks we’ll climb some wonderful ridge lines. Our goal, in addition to climbing all 82 x 4000 ers, is also to climb the Signal Ridge on Monte Rosa, linking up Lyskamm, Castore, Breithorn and the Matterhorn. Another great ridge we hope to climb is that we want to climb the Peutérey Integral which would lead us to the summit of Mont Blanc and which would certainly be the highlight of our adventure. Another great enchainment is in the Swiss Alps above Saas Fee: Alpubel - Tash - Dom - Lendspitze - Nadelhorn and the 3 Nadelgrat peaks."

31.10.2018
Liv Sansoz / Beyond climbing the 82 4000m peaks in the Alps
Interview with French climber and alpinist Liv Sansoz after having completed all 82 alpine four-thousanders.