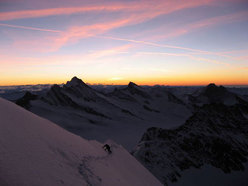 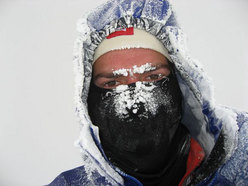 Miha Valic on the summit of Breithorn
Photo by Miha Valic 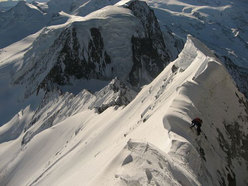 Blaz Grapar on the Taschorn ridge
Photo by Miha Valic 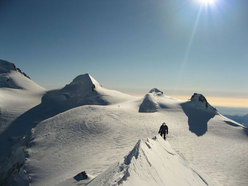 Climbing all 82 4000m Alpine peaks catalogued in the official UIAA list is a project which could take many seasons (or even an entire lifetime) for many a mountaineer. Climbing all 82 in just 82 days, let alone in winter, is a tour which no one has yet manged to achieve. The Slovenian Mountain Guide Miha Valic attempted this feat last winter with the help of a series of companions, reaching a staggering 74 magnificent alpine 4000m summits in 82 days, before completing the list in another 20 days. As Valic recounts, the ascents were hampered by winter conditions which, once again, proved to be the greatest unknown element. As you can tell from his report below, the tour turned out to a magnificent marathon!


ALL 82 4000 ALPINE PEAKS IN A ROW
by Miha Valic, Slovenian Mountain Guide
During this winter and early spring, from December 27th 2006 to April 7th 2007, I managed to climb all 82 Alpine peaks over 4000m high that are listed on the official UIAA. I am Miha Vali, a Slovene alpinist and an international mountain guide, and I had set my goal to climb all of them in 82 days. Due to the bad weather conditions I ascended 74 peaks in 82 days and completed the project in 102.

The idea of climbing all 82 4000-metre peaks of the Alps in a row (possibly in 82 days) has been a thorn in the European alpinists' flesh for a while. In the summer of 1993, English climbers Martin Moran and Simon Jenkins ascended 75 peaks in 52 days - the official UIAA list did not exist at that time yet. Next to attempt this Alpine-marathon in the spring time were Patrick Berhault and Philippe Magnin in 2004, but were unfortunately stopped by an accident after reaching 65 peaks. In the spring of 2006, the Italians Franz Nicolini and Michele Compagnoni climbed 25 peaks from the list and then called off the project due to the bad weather. I was the first to attempt the marathon in the winter time.

The classic routes to the popular 4000-metre peaks are packed with mountaineers in the summer, but the situation in the winter time is completely different. The mountain huts are closed or not taken care of, and the snow makes it extremely tiring to reach them. The combination of a short day, extreme cold, strong winds and complete wilderness gave a sense of magnificent high mountain ranges on other continents. Despite the mild winter in the valleys, there was a lot of snow above 3000 meters and the conditions in the mountains were far from mild.

I wanted to connect and ascend as many peaks in the least possible time, so I only rarely chose the easier classic routes. None of the individual ascents I did is considered a top-level alpine achievement. However, I have done some ridge traverses that can justly be treated as serious winter routes. To mention a few: traversing Aiguilles du Diable, Rochefort and Grandes Jorasses, the Mischabel group, Schreckhorn-Lauteraarhorn, the Brouillard ridge of Mont Blanc… The bad winter conditions and strong winds made even the "easier" 4000-metre peaks a serious challenge. Above all, I had to endure until the very end. Endure 82 peaks in 102 days. It was logistically and physically difficult, but it was mostly a challenge of motivation and psychological endurance. Waiting in a van for better weather and snow conditions could easily be compared to the long days in one of Himalaya base camps, if it wasn't for the masses of shiny tourists jumping around the parking places.

During these months I was accompanied by 15 friends, fellow climbers, who attributed to the success of the project with their time and also finances (in a chronological order): Rok Blagus, Alenka Klemencic (3x), Blaz Grapar (2x), Luka Kronegger, Boris Lorencic, Gasper Rak, Tina DiBatista, Miha Lampreht, Matevz Kramer, Tadej Debevec, Vesna Niksic, Miha Macek, Blaz Stres, Klemen Gricar and Tomaz Jakofcic. There were some others, who wanted to participate, but were unfortunately unable to adjust our timings and the weather conditions. Gregor Sluga provided me with the daily weather forecast.

But the challenge of climbing 82 peaks in 82 days in the winter still remains.